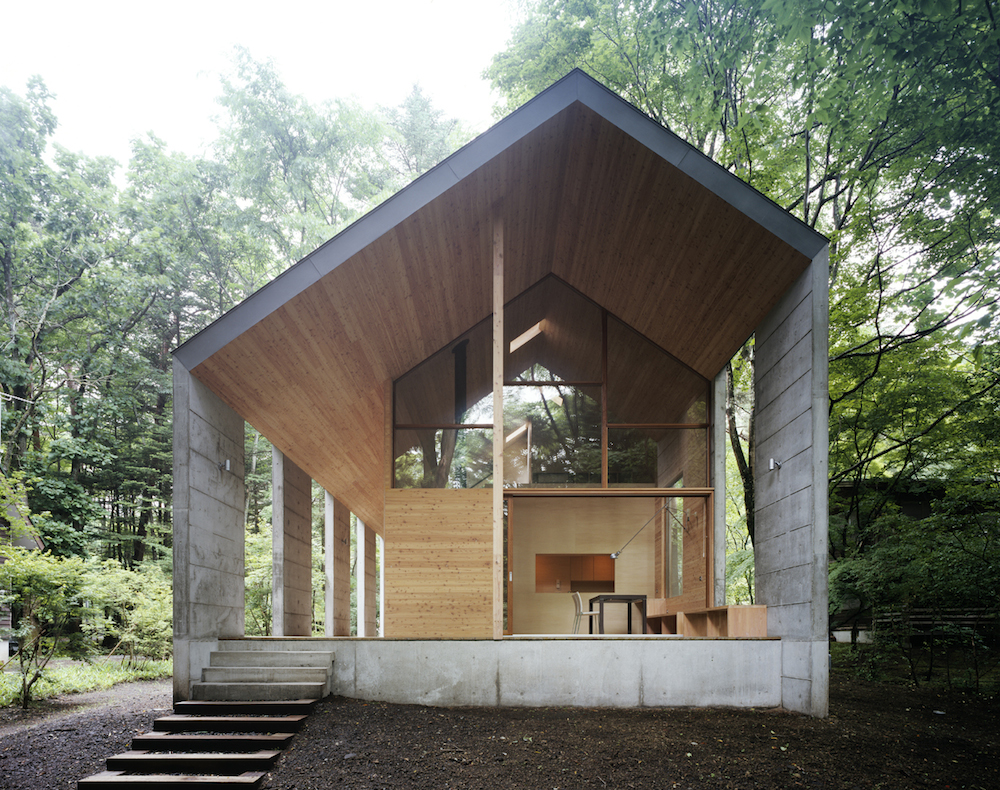 Set within the forested region of Karuizawa, this weekend retreat was built by Iida Archiship Studio with a sense of true Japanese elegant minimalist design. Elegance is indeed a quality rarely extracted from concrete as a building material, but thanks to the simple gable shape and the slender columns which support the extended pitched roof of Omizubata N House, this has been achieved. 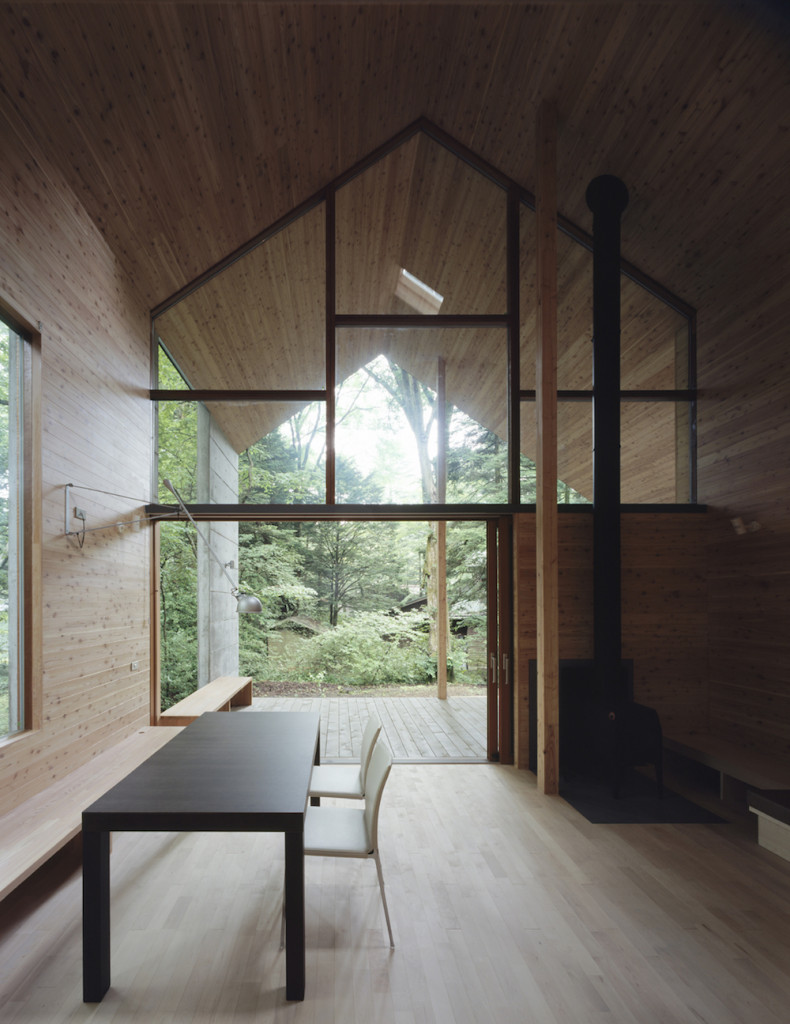 The village of Karruizawa, Nagano Prefect, is a destination commonly sought after by Tokyo dwellers looking for a peaceful getaway. It’s easy to see the zen-like qualities a rural retreat like Omizubata N House offers its owners when they escape the city and its 13 million inhabitants. The interior of the oversized cabin is finished entirely with wood adding to the natural feel of the forest surroundings. 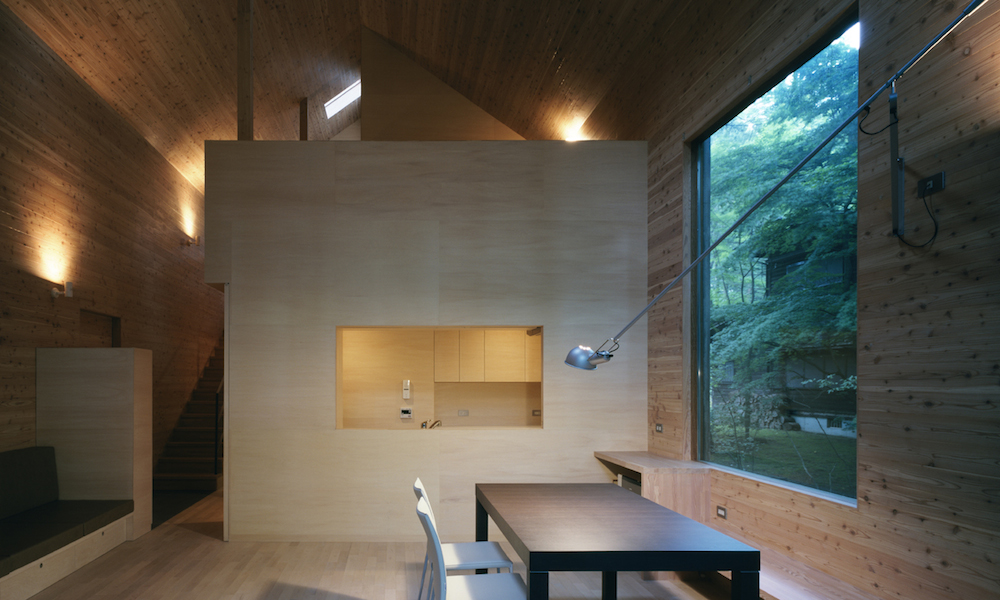 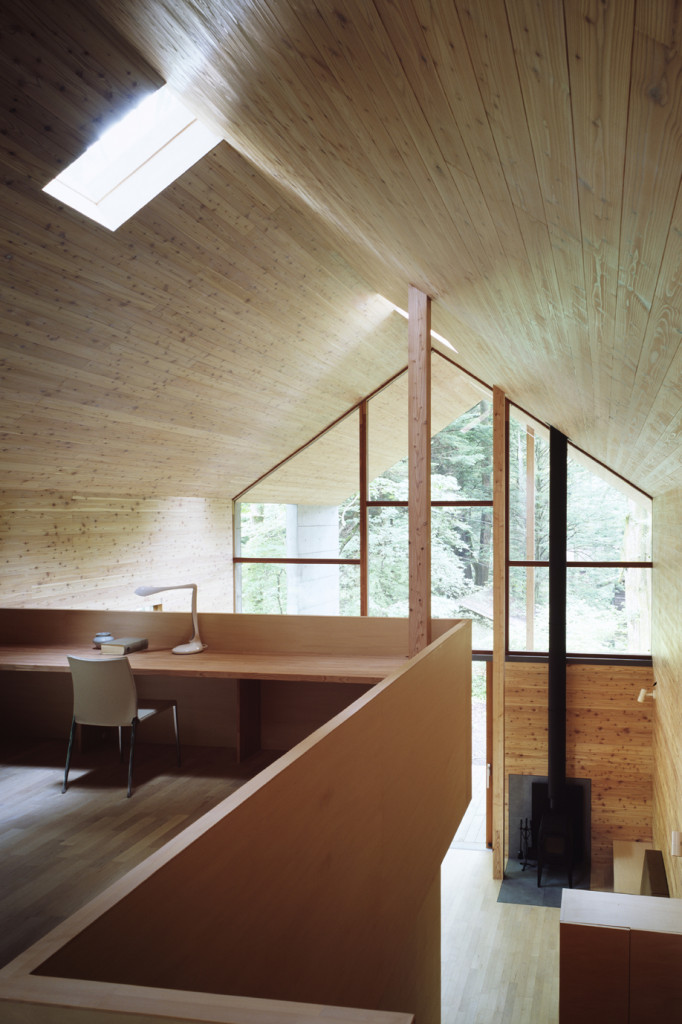 Omizubata N House has a curious quality of looking deceptively small from certain exterior angles, but when viewed from the inside, the overt spaciousness of the structure becomes clear. The prominent gabled roof allows a mezzanine desk area to be fitted, well above the main downstairs living area, while still having the equivalent of a double height ceiling.

The gable shape is a key aspect of both the interior and exterior composition of Omizubata N House. This is thanks to the full-wall windows at the entrance (which are admittedly one of the few sources of light in the house), and the way in which the roof is extended at the front of the structure to form a shelter for the verandah. 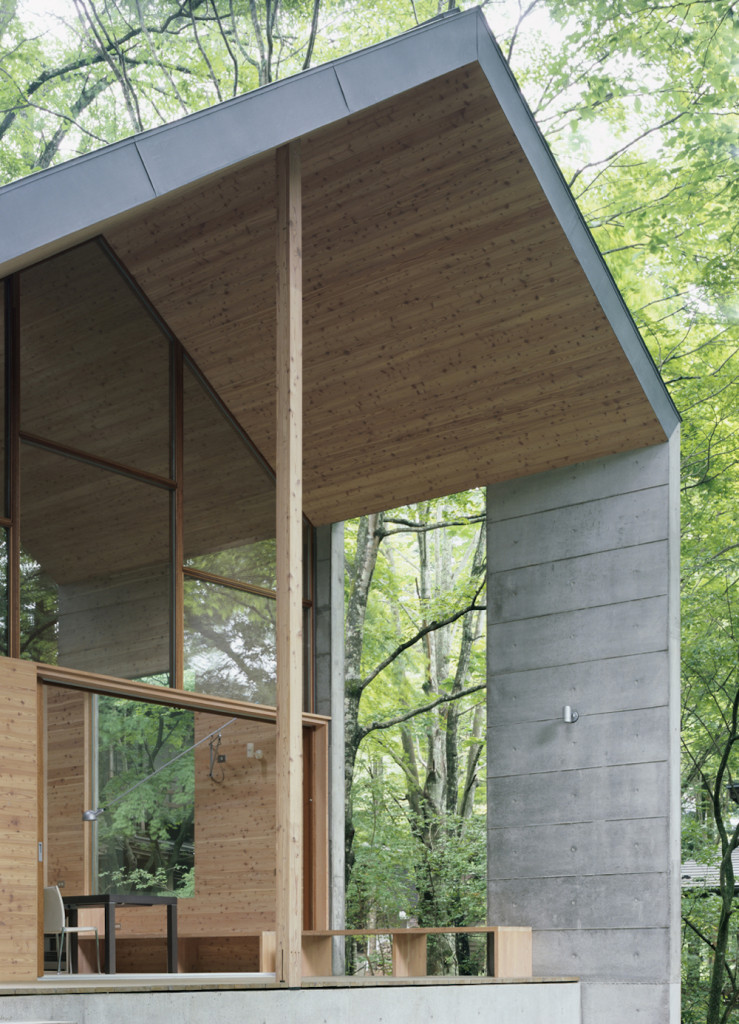 This raised terrace at the front of the holiday house has a sense of being sheltered while also incredibly open to the surrounding forest, with various views cast through the columns which support the roof. These columns are formed by vertically stacked concrete panels which run around the exterior of the forest dwelling to support the extended pitched roof. 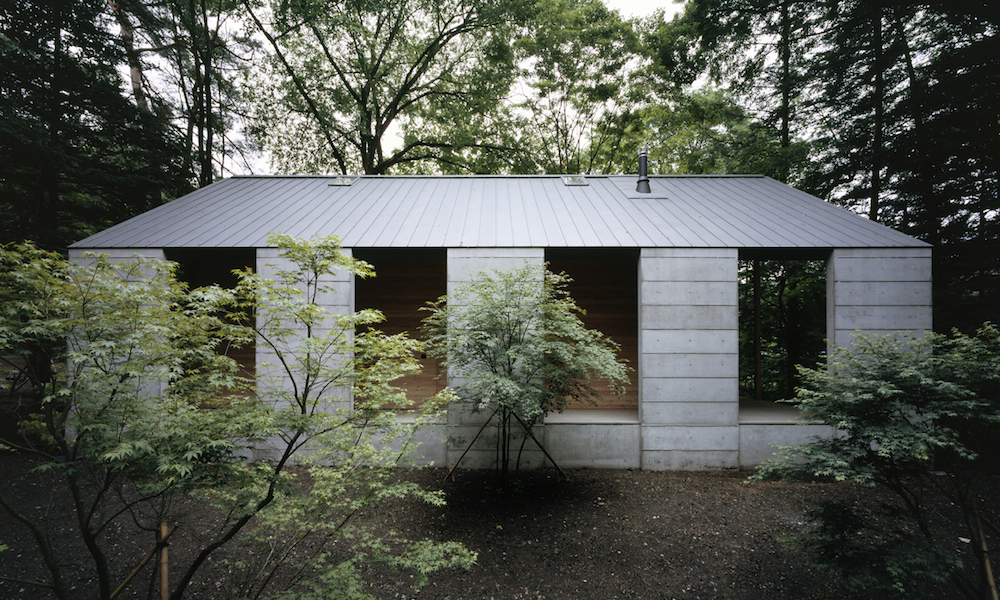 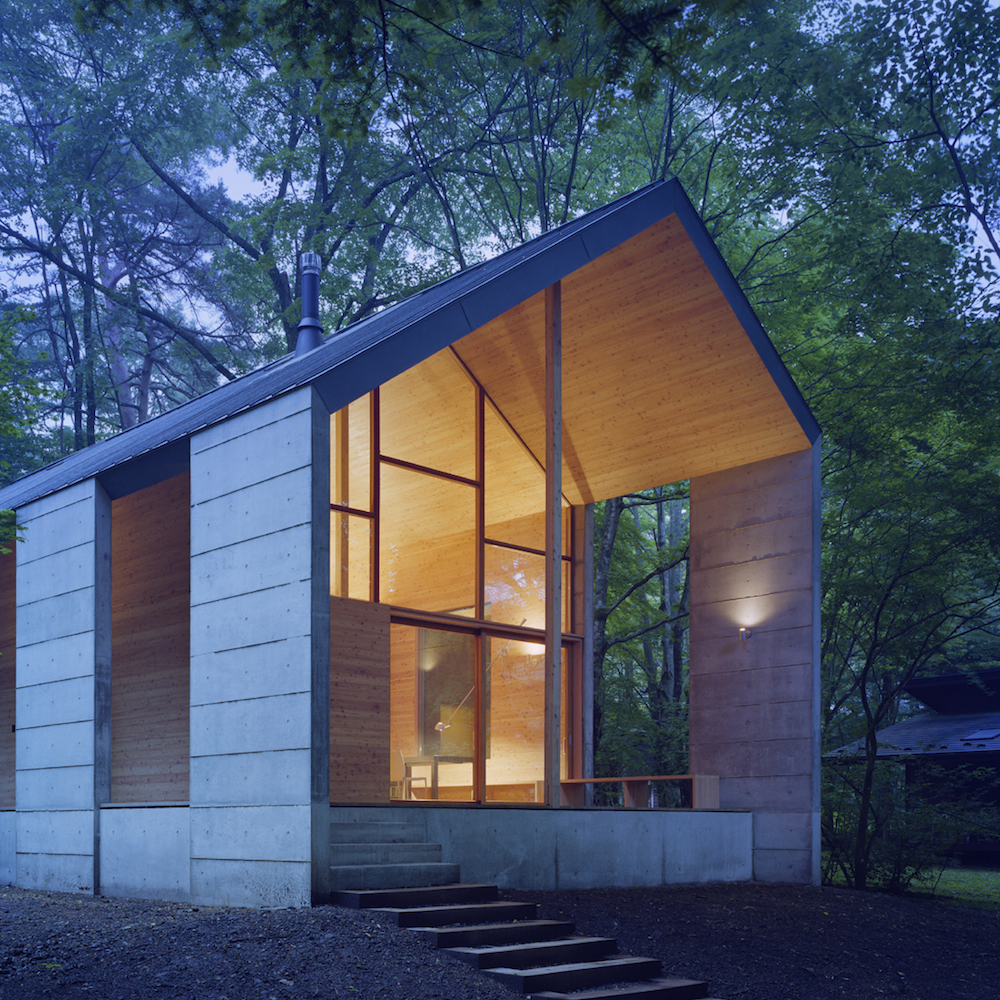 While gable shapes in houses are often determinedly symmetrical, Omizubata N House breaks from the trend to accommodate a sheltered walk way to the side of the dwelling. This leads out to the rear of the plot to continue a path which runs over the forest floor. 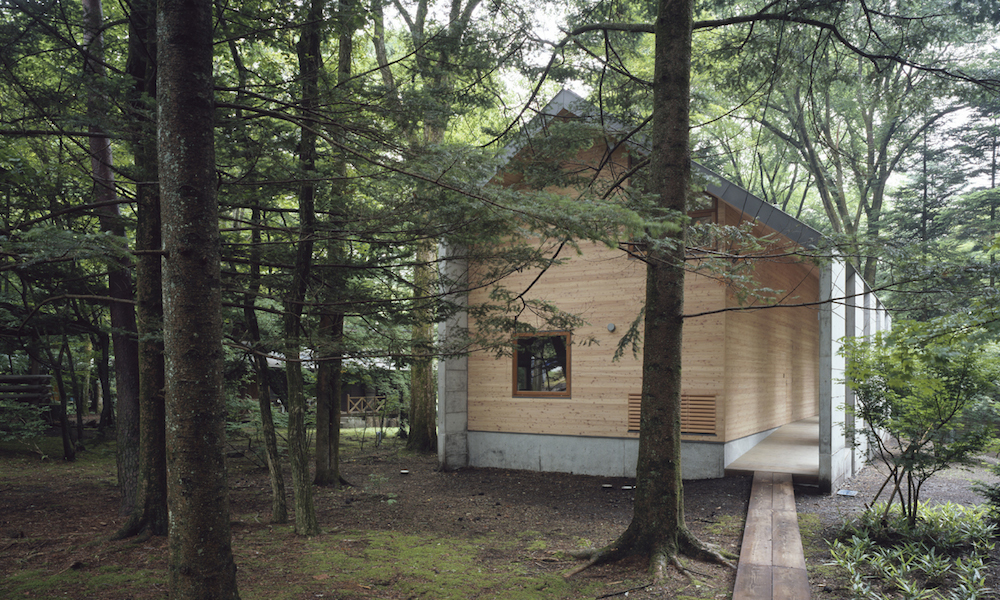