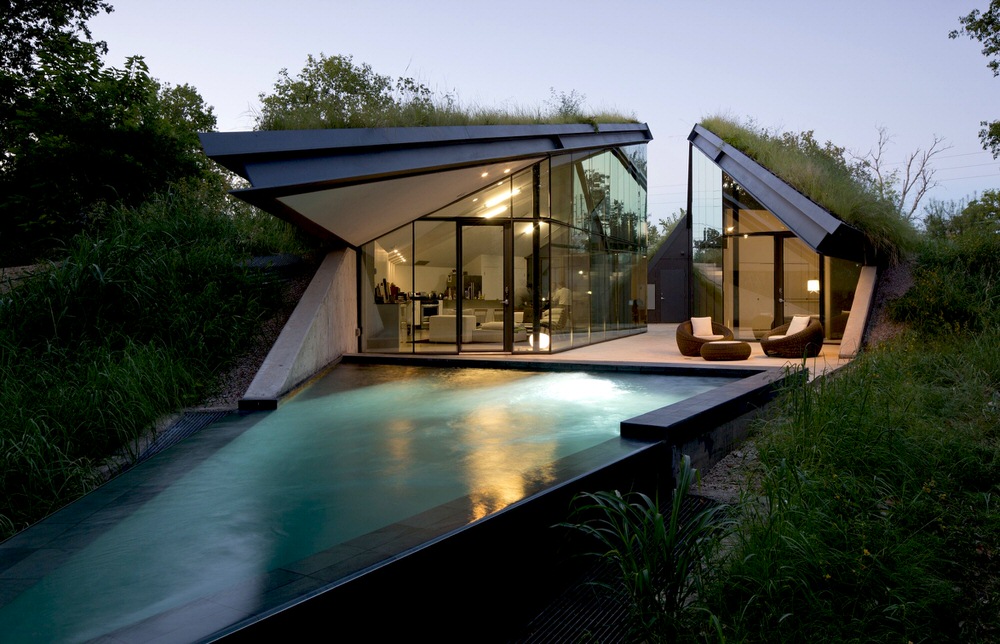 Edgeland House is a modern take on the ‘pit house’, one of the oldest forms of primitive dwellings which were often partially dug into the ground and then covered with sloped roofs. While modern building techniques have permitted more elaborate structural forms to be incorporated into Edgeland House, namely the hollow channel which runs through the centre, the building does stay true to the pit house vernacular and reaps many of the rewards offered by the technique. As the living spaces are built approximately 2 meters below ground level, the surrounding earth serves to regulate the ambient temperature by absorbing and mitigating the effects of the hot and cold periods of the Texan climate. The living green roofs laid over both flanks of this divided dwelling also offer thermal insulation and ensures that Edgeland House doesn’t occupy land that would otherwise have been colonised by vegetation. While most ‘eco’ dwellings take (sometimes token) measures to reduce the negative effects of the building on the environment, Edgeland House is one of the few structures that actively improves its surroundings. It is built on a brownfield site on the borders of a former industrial area which was occupied by the oil and gas industry for the storage of equipment. The land was also scarred by the hasty removal of an underground Chevron pipeline and Edgeland House follows the same path left by this fissure in the land. After years of neglect, Bercy Chen Studio collaborated with the Lady Bird Wildflower Center to reintroduce over 40 native species of wildflowers and grass to the area (via the building’s green roof), in an attempt to recolonise and restore the pre-existing ecosystems. The chosen site and the resulting futuristic dwelling couldn’t have been more suited to the client, ‘a science fiction writer enthralled with 21st century human habitation in the urban frontiers of abandoned industrial zones.’ Edgeland House was designed by Bercy Chen Studio, an architectural practice who have designed some unique (and often bold) houses that stay remarkably sympathetic to their surroundings. If you want to see some of the initial concept sketches and diagrams of the technology integrated into Edgeland House then check out this 2010 article on designboom written before construction began.