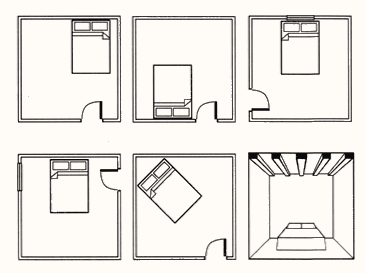 First off, I just want to make it clear that I’m not the biggest fan of the somewhat superstitious motives in the traditional Chinese forms of Feng Shui and certainly not of its modern day, money-grabbing, New Age format. Feng Shui often refers to the flow of ‘energy’ or ‘chi’ when giving reasons for certain furniture arrangements. However if you were to instead exchange these supernatural sounding terms for ‘air’ or ‘space’ then things start to make a lot more sense from a rational but subconscious perspective.

Feng Shui techniques often seem to be based on very logical ideas but were perhaps given these supernatural explanations to seem more appealing or to be explained in simpler ways. Whatever your stance, there is definitely some value in certain concepts in this very broad field. We’ll look at 5 methods of bedroom Feng Shui that can make your bedroom a more subconsciously peaceful, balanced room and help you sleep. However they might not be practical for all bedrooms, particularly smaller spaces.

1 – Sleeping Direction Should Allow View of the Door 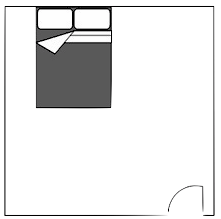 To be honest a lot of people’s bedrooms already conform to most of these Feng Shui ideas as many on a basic level are just about common sense and efficiency. The idea of tending to face the door while sleeping is supposedly a hard-wired instinct we’ve acquired through evolution that makes us more alert to potential intruders. This was humorously pointed out by Sheldon in The Big Bang Theory to Penny.

Although this feature of human nature might have come from a time of inter-tribal warfare in human history, the idea of not being able to see the entrance to a room while sleeping can undoubtedly play on your subconscious and create unnecessary doubt. It is recommended by virtually all Feng Shui enthusiasts that you arrange your bed so as to allow a view of the door but strangely not to place it directly in front of the door.

This might not be possible due to the layout of some rooms and in this case I think that facing the door should have priority. In a similar way to how you wouldn’t see intruders coming from the door, the window could also be an entrance point. However unlikely this is, sleeping with your head under the window can subconsciously lead to unsettling thoughts. There also could be disturbing noises from the wind and rain during the night which could also disrupt sleep. Having a window at the foot of the bed also allows the morning light to wake you naturally.

Feng Shui guides would tell you that having your bed in the corner or not equidistantly in the middle of the wall can create unbalance and from a rational perspective I can certainly see how, particularly if the bed is shared by two people. Not only is it impractical for one person to have to climb over the other to get out of the bed which will undoubtedly disturb sleep, it can also create a feeling of entrapment for the other sleeper no matter how subconsciously. The best way to create a truly balanced relationship is certainly to have the bed in the middle and allow easy access from both sides.

4 – The Bed Shouldn’t Be Arranged At An Angle 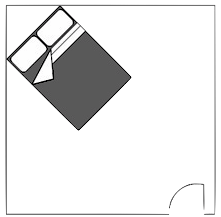 The headboard should nearly always be placed up against the wall and the bed certainly shouldn’t be placed in the middle of the room at an angle. Not only can this be subconsciously unsettling but it is bound to be uneven in some way and it just isn’t an efficient way to arrange a room. Most rooms tend to be square and so positioning the bed in this way will create excess triangular areas that will just end up being wasted space.

5 – Don’t Store Things Under The Bed

This might not be possible for some as the space under the bed often offers vital storage but having such a shortage of space could likewise serve as a kickstarting incentive to have a clear out and declutter your life. Things under the bed might be out of sight most of the time but just knowing they’re there can subconsciously alter your state of mind and create feelings of imperfection. This can particularly be the case if you tend to lazily cram things under the bed haphazardly as a quick fix .

If alternative storage is available in the form of wardrobes, cabinets and shelves then it’s worth using these and freeing up the space under the bed. However if you’re living in a small apartment and you have no choice but to keep things under the bed then its worth systematically arranging what you store and carefully deciding what is worth keeping so you don’t end up sleeping on a pile of junk