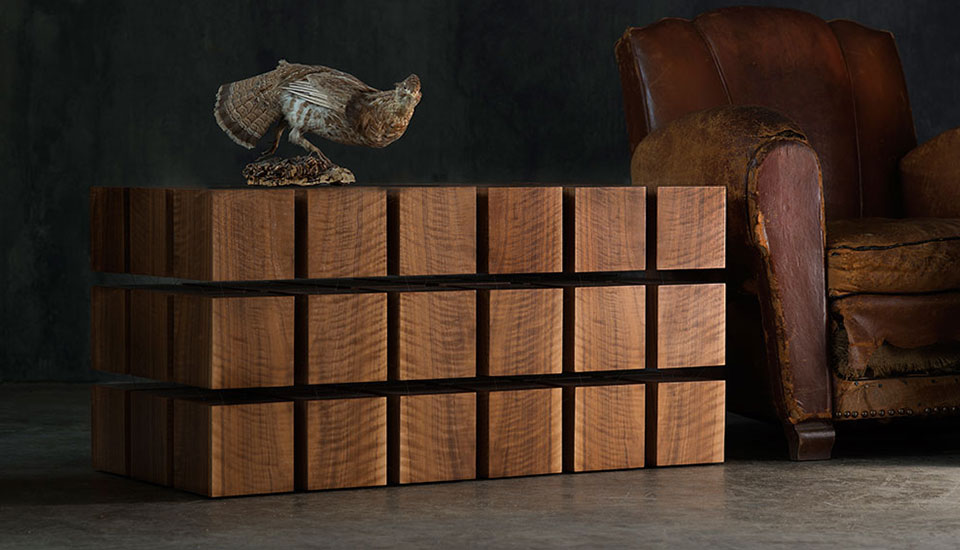 Probably one of the most remarkable and perhaps superfluous coffee tables in the world, the Float Table by RockPaperRobot is composed of a 3 dimensional grid of cubes. At first glance there might appear to be a darker inlay or perhaps a groove between these cubes but look closer and you’ll see that they’re actually levitating.

Inside each of these walnut cubes are carefully calibrated magnets that repel each other forcing the cubes apart in doing so. However a complex network of steel tensile cables hold the cubes in place elegantly displaying Newton’s 3rd Law of Motion. This balance of forces creates a  harmony that Isaac Newton himself would have been most proud of. Each cube appears to have edges that are 5.5 inches long with a 1 inch gap in between. The Float Table is being sold a 6 x 3 x 3 coffee table configuration or as a 3 x 3 x 3 side table. It has been mostly pictured in American black walnut which it looks amazing in but if you take a look at RockPaperRobots specification sheet it states that they’re willing to create customised Float Tables with other wood types as well as catering to other size specifications.

The prices for Float Tables aren’t being openly disclosed by RockPaperRobot but they are allegedly around $12,000 for the 6 x 3 x 3 configuration which is steep by anyone’s standards. However when you consider the materials used, the calibration needed to balance the magnets with steel cables, and the quantity RockPaperRobot are likely to sell, it is actually quite a reasonable price. As some have pointed out, the magnets built into the walnut cubes could damage phones, laptops and other electrical equipment placed on the table; others claim the level of magnetism is too weak to affect modern day devices. To be honest I’m not well versed on the subject but I’m sure the designers wouldn’t have made such a considerable oversight while working on the Float Table.

However this coffee table could certainly have other shortcomings presented by the gaps in between cubes and the flexibility of the table itself. Small objects could easily fall between these gaps which would be a real pain to recover. Likewise the table wouldn’t really be suitable for heavy objects which would easily compress cubes making the surface uneven. Perhaps it is better to look at the Float Table as a piece of art rather than a functioning table but I know I certainly wouldn’t mind having one in my living room.