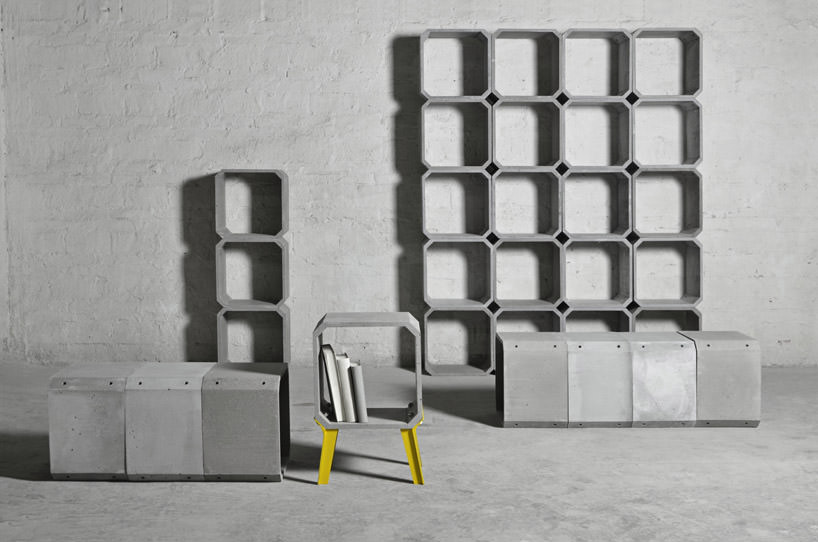 The Zhi / Kou modular furnishing system by Bentu Design is based around simple cement frames that can be combined to form a wide array of furniture pieces. The ‘square’ units have chamfered edges — actually making them ever so slightly octagonal — to accommodate hex bolts that are used to fix the frames together. An individual cement cube in this series is called a Kou while the term Zhi refers to a Kou which has supporting legs attached. A Zhi can serve as a standalone side table, or as a base for a larger installation. These two components that make up this series of modular, multi-purpose furniture are actually named after the Chinese pinyin phonetic characters 只 (zhi) and 口 (kou). The resemblance between Zhi’s supporting metal legs and the dangling limbs of the corresponding Chinese character is obvious, while the boxy Kou symbol represents the simple square modules. The legs of the Zhi units are given a smooth lacquered surface in either black, red, yellow or blue, and this contrasts sharply with the rough texture of the grey cement which has recycled construction waste blended into the extruded mixture. If you’d like to see other modular furniture systems made of cement, take a look at Basso Shelf by Thomas Feichtner which features fibre cement frames that are held in place by simple wooden pegs.