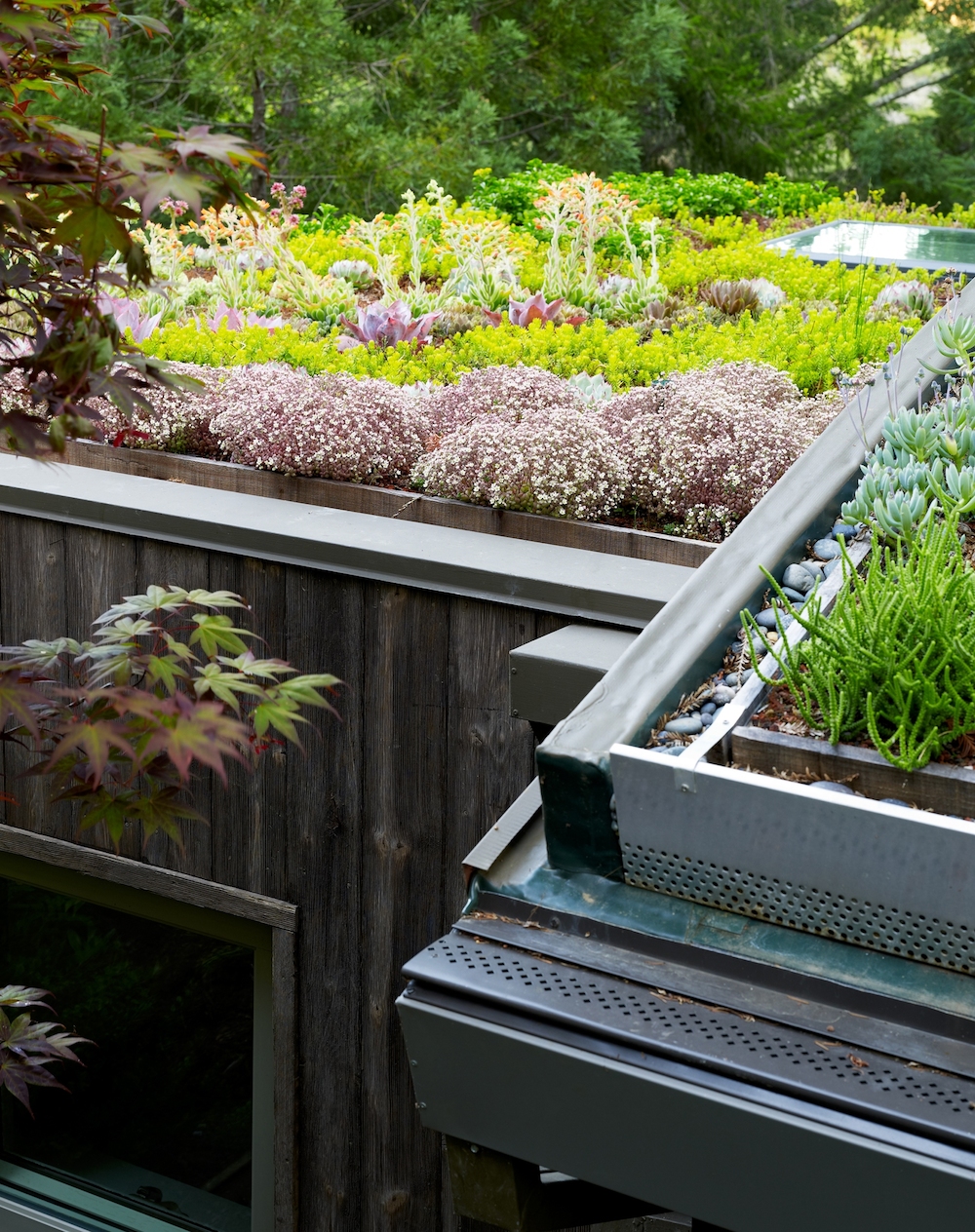 Living roofs, often referred to as green roofs, are rapidly growing in popularity in sustainable, eco-friendly architecture but their incorporation seems to be largely limited to modern rural housing. There’s no reason all houses couldn’t start adopting it and as we can see in the sod roof houses of Iceland and the Faroe Islands it isn’t exactly a recent development. It has been architecturally possible for quite some time and not just limited to fictional houses such as The Hobbit and Teletubbies.

However new technologies such as plastic membranes, compartmented grids which hold soil in place and automatic irrigation systems are making it an increasingly low maintenance solution to roofing. Here are some of our favourite examples of living, green roofs including grass turf, wild flower meadows and succulent sedums. 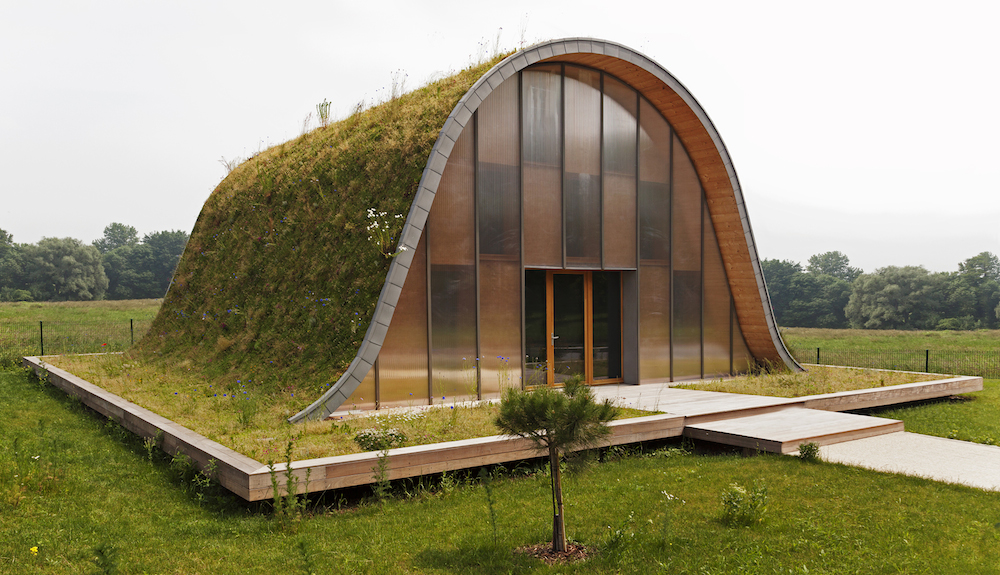 La Maison-vague which translates into English as Wave House, was designed by Patrick Nadeau and features a smorgasbord of plant varieties including wild flowers, meadow grass, sedums and other perennials. The house has a sweeping curve similar to a sine wave which makes it appear more like a hill or mound. This shape creates a seamless surface of plants on the green roof but did mean that parts were extremely steep and required special consideration for drainage, water retention and soil erosion. 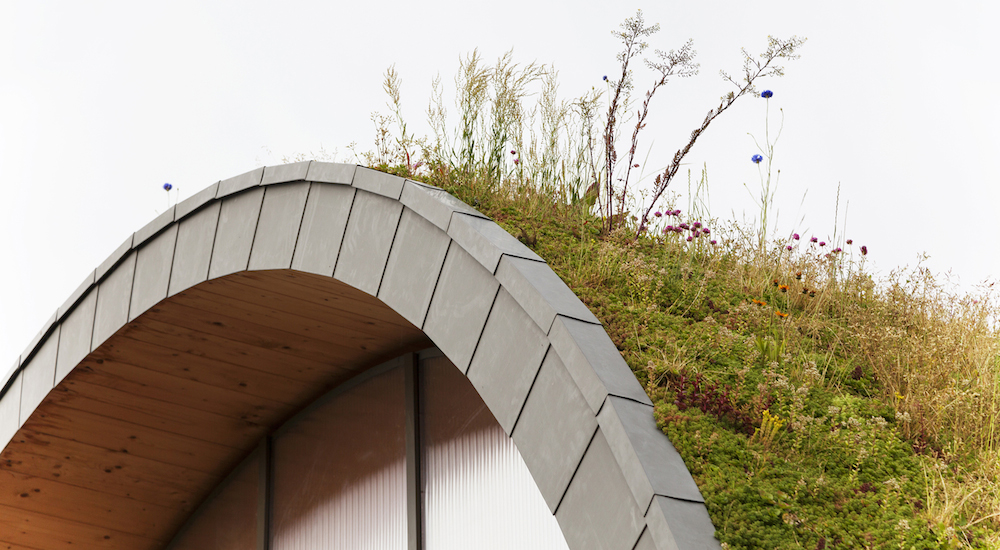 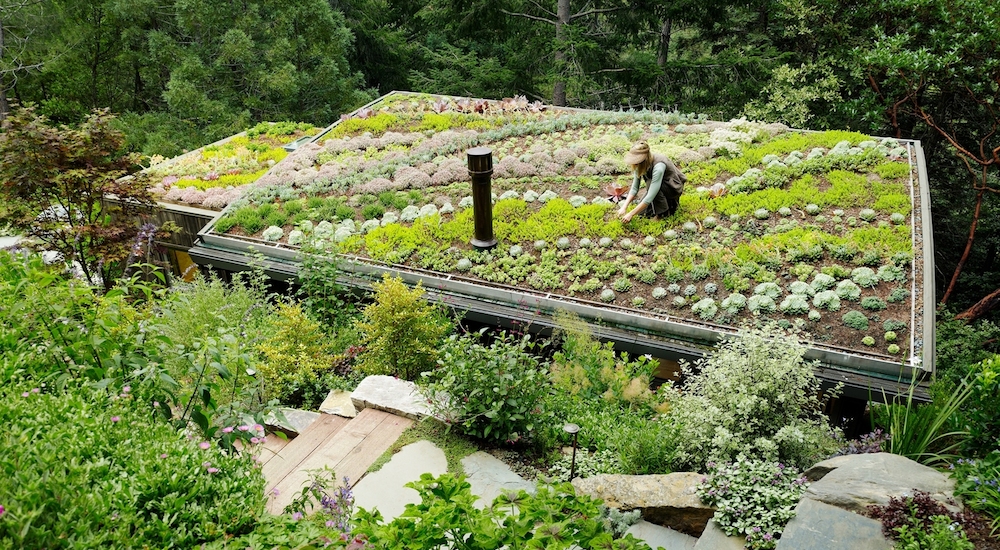 We previously featured the Mill Valley Cabins on Homeli but the remarkable roofs of sedum (otherwise known as succulents) definitely deserve additional attention in this green roof collection. There are a wide array of different species of succulent sedums in this roof that have been arranged in a banded pattern. This looks very carefully considered but I think I’d prefer them planted randomly over the roof. 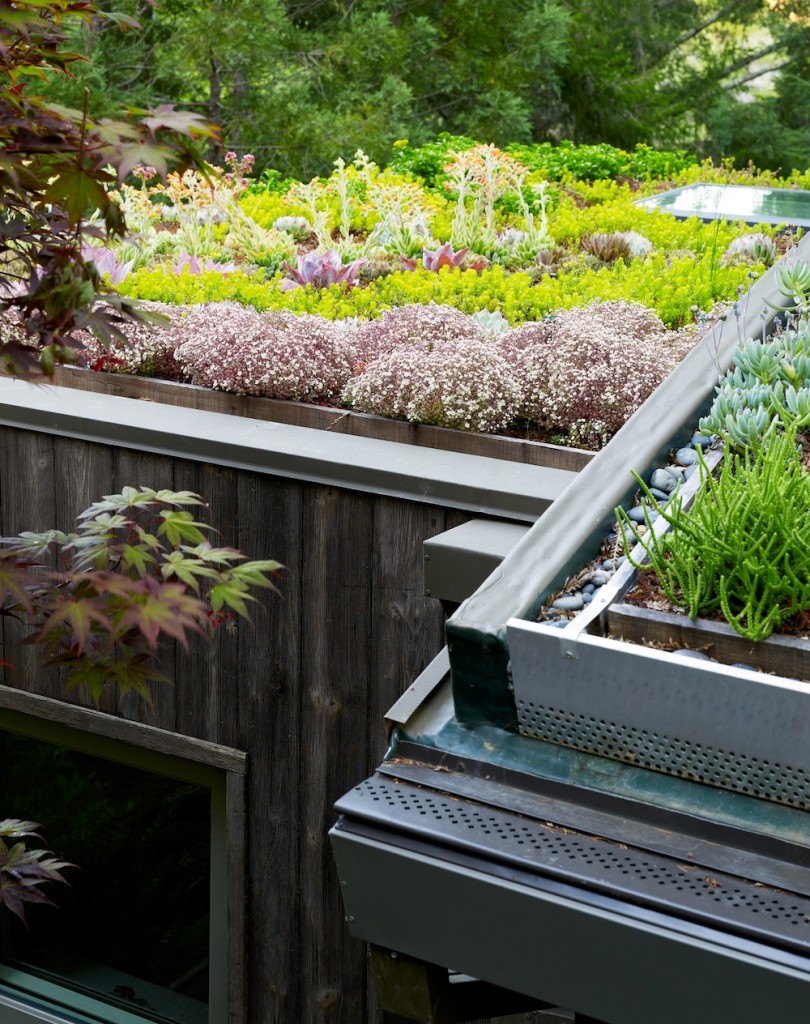 This eco-home built for a small budget on the Isle of Skye might look familiar, that’s because it was featured in series 12 of Grand Designs on Channel 4. It was designed by Rural Design Architects who were also responsible for the Fiscavaig eco home on Skye to which it bears many similarities. However the Kendram Turf House features a grass living roof which helps it blend into the surrounding landscape. The grass roof does look a bit too neat in this picture as it was formed from fresh rolled turf but hopefully over the course of time the local grass species will naturally colonise the roof helping it match. 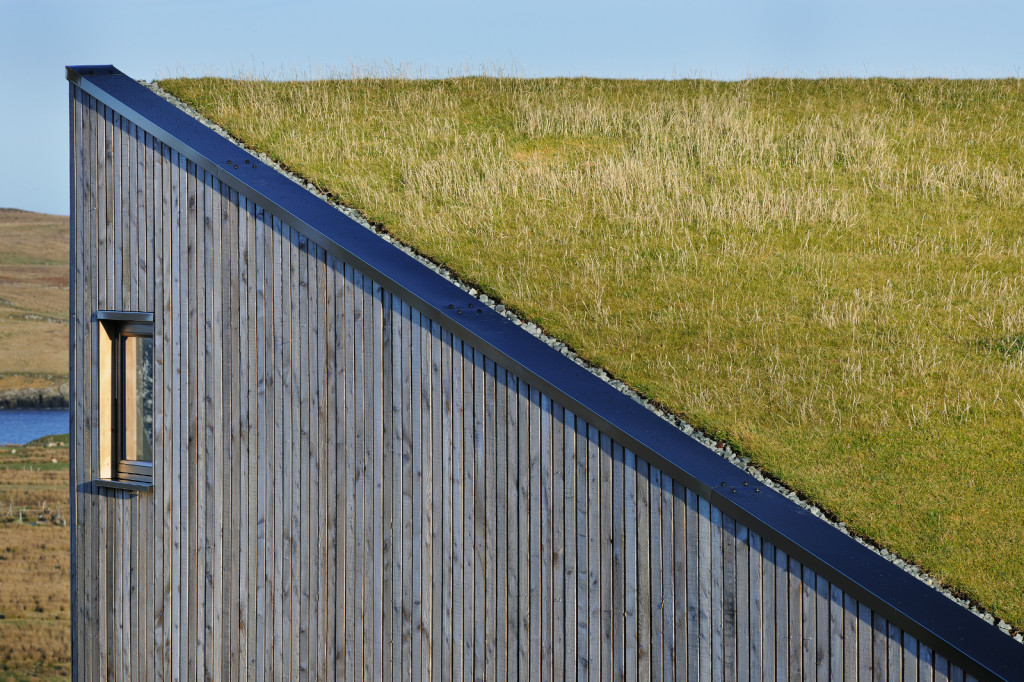 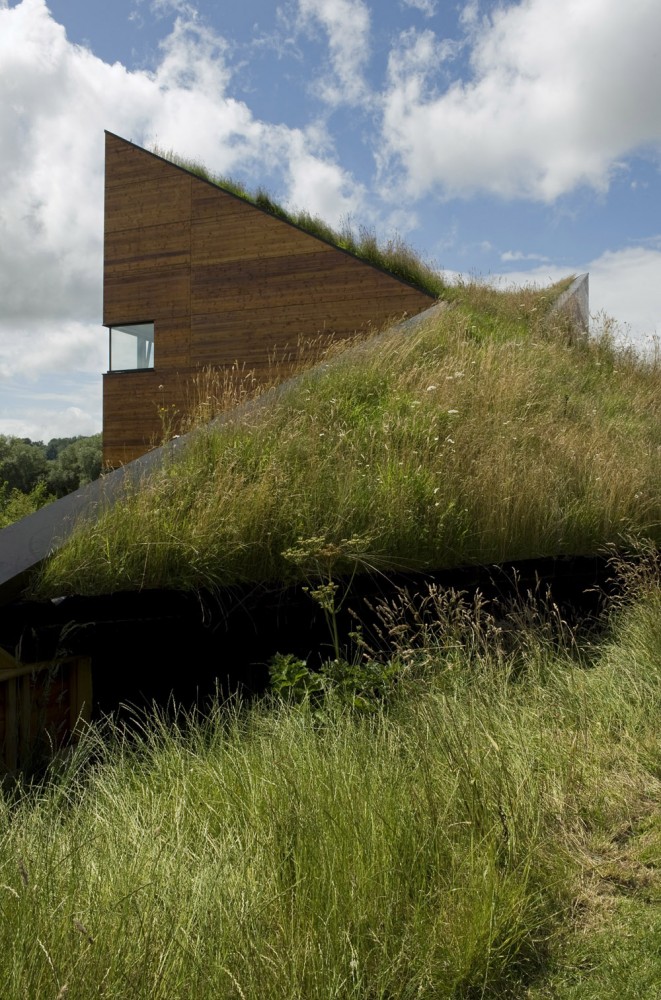 Welham Studios is another example of a grass green roof but one in which local grass species have colonised to create a wild looking roof. The end result resembles a wild flower hill meadow and in the picture below you might at first glance be deceived into thinking the two people are simply standing on a hill instead of a green roof. Welham Studios was designed by Mark Merer and has a very angular form which contrasts brilliantly with the authentic grass living roof. 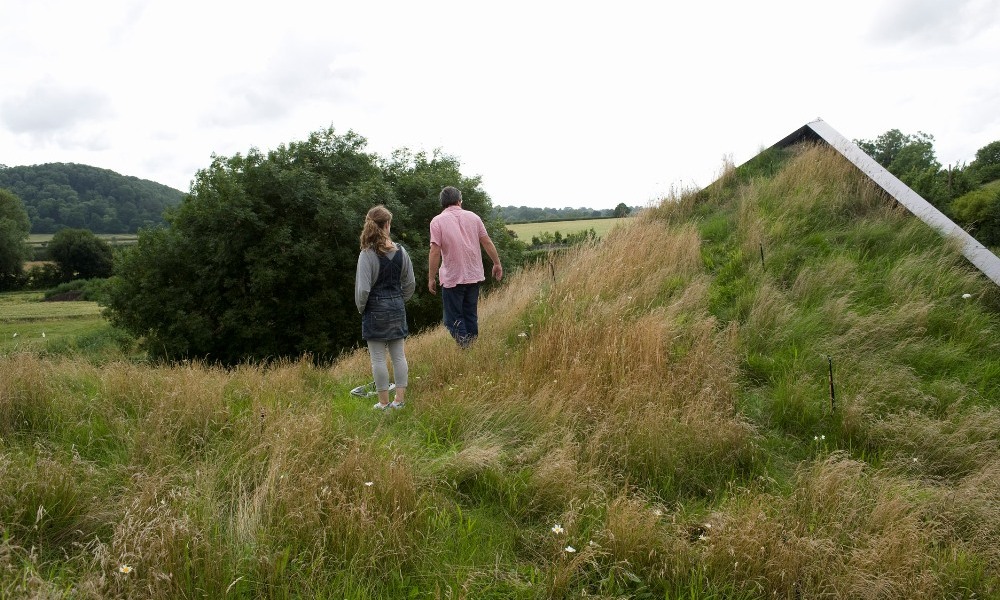 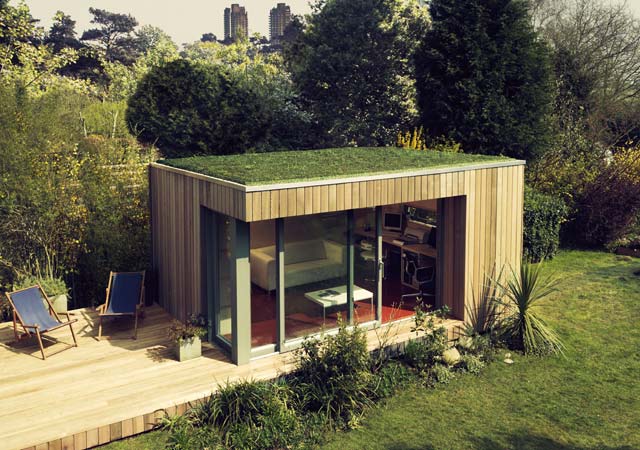 Ecospace garden studios were one of the first things we featured on Homeli and to this day remain my favourite. These prefabricated buildings are highly configurable and have a strong emphasis on sustainable materials with ultra efficient specifications. One of their options are green roofs which they promote as being environmental, low maintenance and highly insulative. Above we see an example of a grass turf living roof on an Ecospace and below a view of the sedum plants they can also offer. 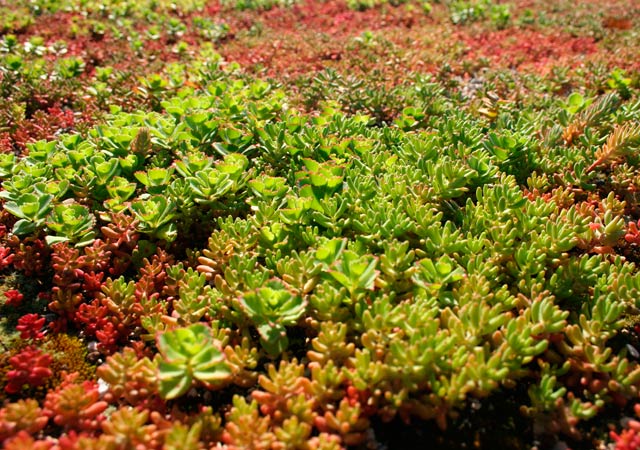