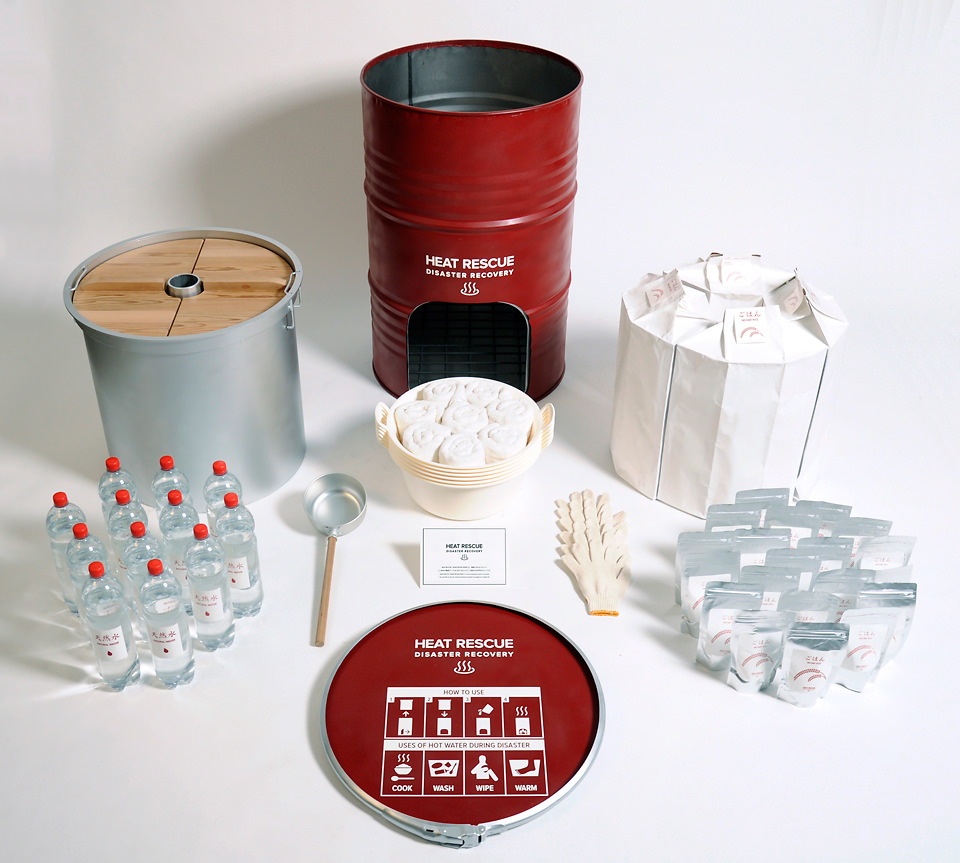 A fast response is vital after a natural disaster such as an earthquake or tsunami to reduce casualties and lessen the impact of secondary hazards such as dehydration, hypothermia, starvation and disease. After the 2011 Tōhoku earthquake and tsunami in Japan, designer Hikaru Imamura developed this concept for a disaster recovery kit which can help survivors fight against these secondary dangers after the initial disaster. The key things we need to survive are water, food, heat and shelter and the Heat Rescue Disaster Recovery Kit answers to the three most urgent of these. Within a standard oil drum, Hikaru Imamura has managed to fit bottled water, towels, a ladle, protective gloves and enough freeze-dried food to sustain 30 people for 2 days. Not to mention the fact that the drum itself is transformed into a stove with a large pot at the top to boil water. Hot water has a surprising amount of potentially life saving uses after a natural disaster such as keeping warm, cooking, and sterilising to stymy the spread of disease.

The only thing I think this disaster recovery kit concept is lacking is a means of starting the fire. A simple sealed packet of dried matches and even some kindling could make getting a fire going a much easier task after an earthquake. There would likely be plenty of firewood laying around in the form of debris but this would initially be very damp after a tsunami. I don’t even want to try and imagine how much one of these drums must weigh but this is an unavoidable fact – wood, food and particularly water simply are heavy commodities. Luckily the drums can be rolled or trundled avoiding the need to directly carry them although this might be tricky over debris strewn paths directly after a natural disaster such as an earthquake or tsunami. Heat Rescue Disaster Recovery Kits would come in standardised industrial drums so are logistically easy to transport and store with existing warehousing equipment and shipping methods. Hikaru Imamura proposes that the drums be kept at municiple storage facilities and company offices although I think it could be more practical for each family to keep one in their homes to make sure they have a kit when they need it straight after a natural disaster. It would also be worth considering tying or chaining the drums to a strong anchoring point to make sure that the Heat Rescue Disaster Recovery Kits themselves don’t get washed away by the tsunami.