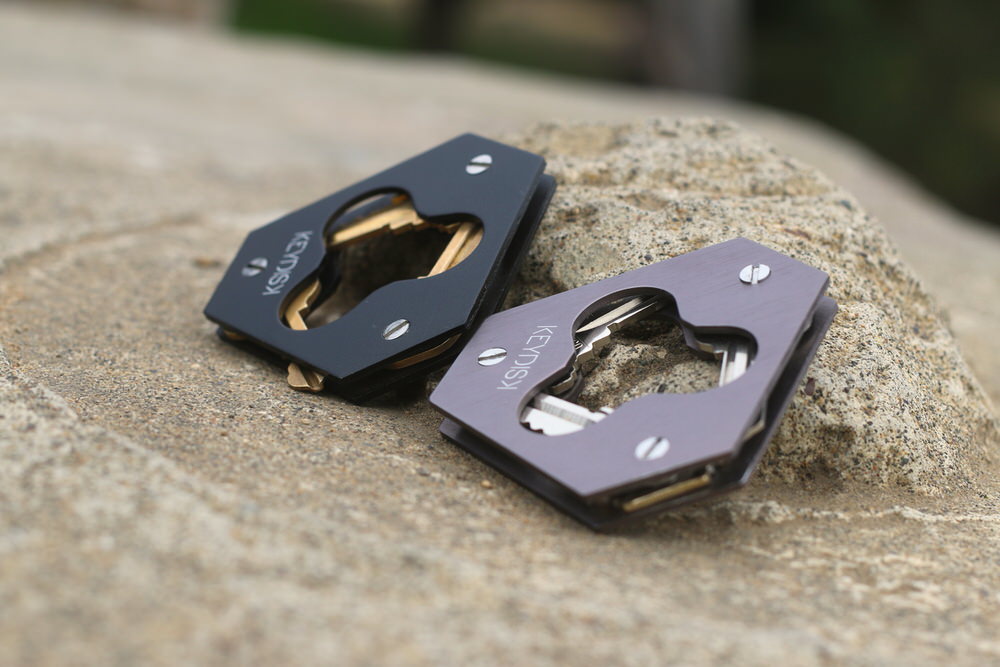 KeyDisk offers a solution to the the irregular and chaotic jumbling of rigid shapes which never seem to quite fit comfortably in your pocket. It’s a simple flat device in which you can neatly store up to 6 keys and keep them in order, both figuratively and literally. A KeyDisk is hexagonal in shape (although perhaps better described as a truncated triangle), and is designed around three posts at the corners over which you can fit your keys. The keys can then rotate around these posts and flip outwards like a Swiss army knife when needed. The device can hold up to 6 keys, but it seems to have been primarily designed for modern Yale style keys and the more old-fashioned mortice lock keys won’t fit. Specifically, the dimensions of KeyDisk itself limit the length of keys stored to 6cm and is intended for keys 2mm in width. This gifset shows how you can attach keys to a KeyDisk through stop motion animation. It’s perhaps not as straightforward as attaching a key to a conventional ring, but no doubt a task anyone could undertake with the aid of a screwdriver. After a successful bout of crowdfunding, Keydisk are now offering an even more refined version of the design, with hollowed out plates to make it even easier to select the correct key. The internal void can also serve as a bottle opener, an invaluable tool which people tended to keep on their keys prior to KeyDisk. We’ve seen a similar such concept in the past on Homeli with TIK, a key storage system designed around bike chain. TIK offered users the opportunity to seriously strip back their key collection, but their crowdfunding campaign wasn’t ultimately successful and I think this was largely due to how complex the process of setting up a TIK would be. It involved sending off for key blanks compatible with their current locks and then getting these new blanks shafts cut. Whereas KeyDisk has the immediate and quite obvious advantage that you can use your current keys. As mentioned, KeyDisk was originally brought into creation through a Kickstarter campaign but you can now order your own through the KeyDisk website. Modestly priced, at between just $19 for the original and $25 for the revised design, KeyDisk could make an ideal housewarming gift.