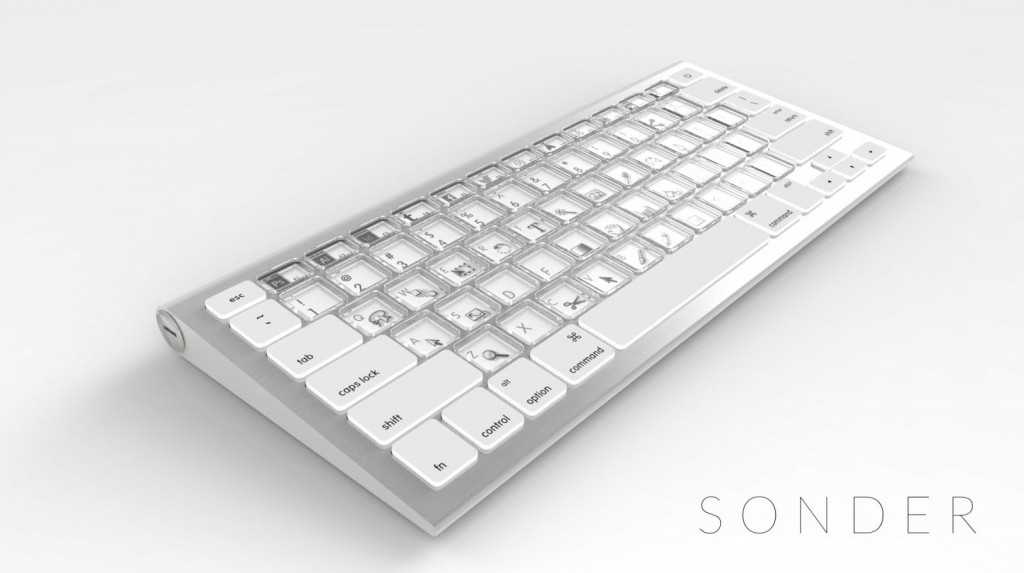 This keyboard was created by Sonder Design and features keys with E-Ink displays that can change both appearance and function. The hardware design is clearly heavily based on Apple’s standard wireless keyboard, but perhaps falls short in terms of elegance. However Sonder is primarily a utilitarian device which can seamlessly transition between different keyboard layouts as you switch between different programs onscreen.

Sonder is a relatively new term coined by John Koenig as a part of his ‘Dictionary of Obscure Sorrows’. This project involved creating terms for emotions and sensations that lacked words and sonder was defined as ‘the realisation that each random passerby is living a life as vivid and complex as your own.’ Perhaps the designers of this e-ink keyboard selected this relatively uncommon term due to the realisation that individuals use their keyboards for very different purposes.

The e-ink screen keys allow you to fully customise your Sonder keyboard, but the system also has many presets for different languages, symbols for common program shortcuts including Photoshop, as well as controls for computer games such as Halflife.

Being able to change symbols makes the Sonder keyboard future-proof, or at least enables it to stay up to date with current trends. For example in one demo setup the F-number keys have been assigned to various social media sites including Tumblr, Instagram and Reddit, but its perfectly possible that several of these platforms will have faded into obscurity within the next 5 years. It would have been somewhat shortsighted of a hardware designer to include a MySpace symbol on a keyboard back in 2005.

This isn’t the first programmable display keyboard and was preceded by the Optimus Maximus keyboard back in the mid-2000s. However this keyboard used OLED displays for the keys which pushed the price up to $1,500 on their Optimus Popularis model.

Sonder on the other hand incorporates the much more appropriate technology of E-Ink displays. These panels consumes barely any electricity and are perfectly suited for the frequency at which keyboards would need to change. As a result the Sonder E-Ink keyboard is currently listed for pre-order on their site for $199 each, but there will reportedly be a Kickstarter campaign for the customisable keyboard later on in the year.