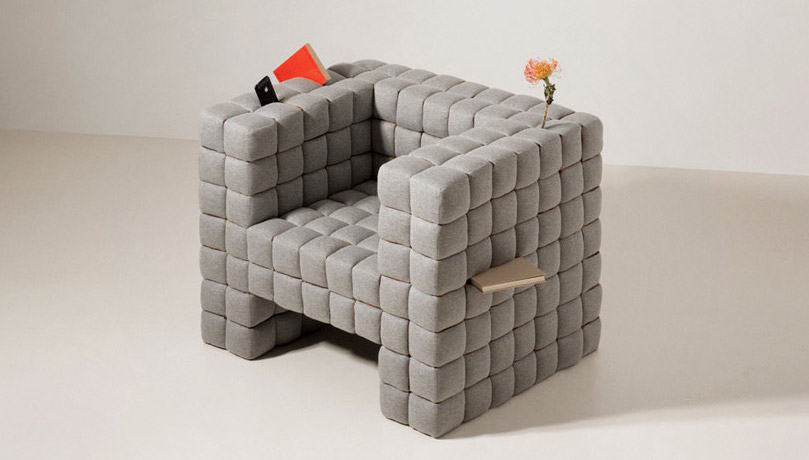 The Lost In Sofa by Daisuke Motogi was originally designed back in 2010 but it is now finally going into production, although at a price out of most people’s range. The Kids version as pictured below is already available to order through Huzi Design for the considerable sum of $2,900 and the full sized adult version of the armchair will be “available in the near future”. The Lost In Sofa armchair plays on the phenomenon in which our personal paraphernalia including keys, wallets and coins tend to fall into the gaps between a sofa’s cushions. In fact this sofa celebrates the occurence and actively encourages it by making the entire armchair out of small padded cubes with gaps in between them in which you can intentionally store books, TV remotes, iPads and just about anything else you have about your person. We previously featured the works of Daisuke motogi in the form of his Flip Series Furniture, a range of chairs which can be rotated 90° or 180° to transform from a dining chair to a lounge chair for instance. The Lost In sofa as pictured here is also another example of dual-purpose furniture which both serves as a super comfy armchair but also as a kind of storage unit in a similar sense to shelving. A smaller Lost In Sofa for Kids by Daisuke Motogi has also been designed with a single row of cubes making up the shape of the armchair. This does limit the amount and the size of the things that can be stored in its recesses but aesthetically I think it’s better than the full sized edition. It can currently be pre-ordered through Huzi Design. Grow Your Own Chair from Grass, Soil and a Cardboard Framework