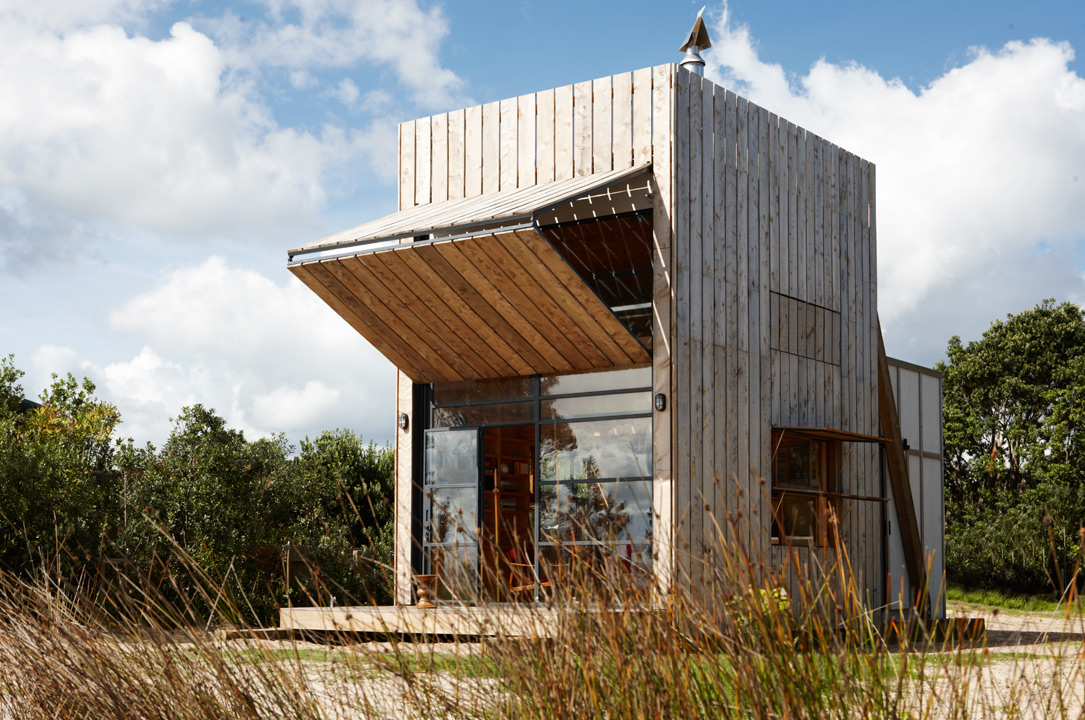 On a beach in New Zealand where buildings need to be removable by law, Crosson Clarke Carnachan Architects built Hut on Sleds. This wooden structure serves as a holiday cabin for a family of five and demonstrates sustainable architecture that sits on – rather than becomes a part of – the surrounding environment. The hut was built on two wooden beams with ski-like bevelled ends which allow the Hut to be dragged by tractor to retreat from the sea’s approach upon this area of coastal erosion. The living area has a double height ceiling and Hut on Sleds features a set of two-storey glass doors on the seaward side to compliment this. These huge doors are fully covered by a shutter when the hut is not in use – and when it is, this shutter retracts to form an awning. The windows on the side elevations also feature similar smaller shutters which fully secure the hut out of season. While not exactly small by beach cabin standards, Hut on Sleds is certainly a very compact structure at 40m². A family of five can live and sleep there and the use of wood in the interior allows compartments and cabinetry to be built into virtually all surfaces. The three children of the family share a triple bunkbed with cubbyholes at the heads of the beds and discrete storage cupboards at the feet. Hut on Sleds features a series of water tanks at the rear of the structure to accommodate greywater recycling and a worm sceptic tank system which add to the cabin’s eco credentials. The plumbing in the wash room incorporates upcycled garden tap fixtures into its exposed pipework and the shower also features a door to the outside. When not in use, a series of shutters cover all of the windows in order to defend the hut from both potential intruders and the coastal elements. The huge shutter of the front facade is manually operated via a crank wheel at the side of the hut, although this is absent in the picture above. This is because the crank wheel is detachable and serves as a sort of playful key to the hut which the family can keep with them off-season.