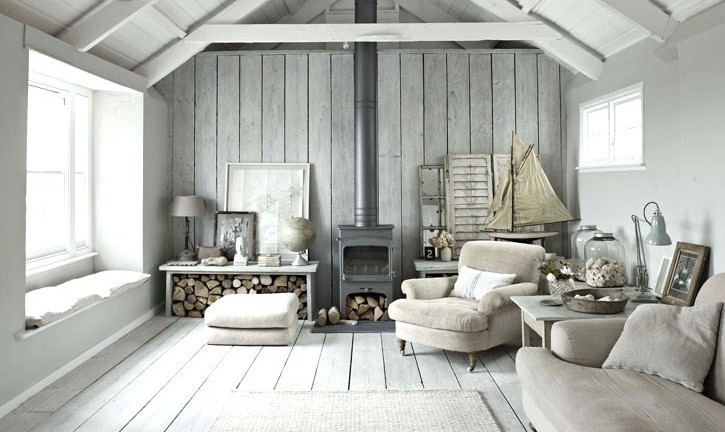 Hope House was a Grade II listed fishing net loft situated in the unusually named, Cornish town of Mousehole which last year was converted by interior designer and photographer Paul Massey. It received a lot of attention from interior design blogs and magazines including Livingetc and quite rightly so! Not only was Paul Massey the interior designer of Hope House, he was also the one who captured these extraordinary images which I find to be unusually immersive and are perhaps part of the reason this project has received such wide exposure.

Mousehole is a coastal village with an enclosed fishing harbour and this coastal theme has been brought into Hope House in a subtle but definite way. Whether it be the weathered, salt-encrusted appearance of the floorboards which were in fact created from old scaffolding boards, or the nautical paraphernalia which adorns the side tables such as the sailing boat model, the ammonite fossil or the vintage map of the Cornish coastline, this really feels like a beach house without being twee.

Paul Massey’s houses have very a distinctive style: they always seem to revolve around a purely off-white colour scheme. There are absolutely no splashes of colour in Hope House and yet because of this, all the subtler aspects of the design stand on equal ground and become all the more noticeable.

Faded grey and taupe colours seem to be the dominant theme when it comes to Hope House and yet it hasn’t become monotonous or oppressive but actually very peaceful and contemplative. This could come from all the little details scattered throughout the house (such as the vintage map, the firewood storage and the tripod floor lamp), or indeed just from Massey’s great eye for interior design.

Hope House is shabby chic but without the cliché Notting Hill connotations; there’s none of that kitsch distressed painted furniture to be found here. All of the items in Hope House were picked up from flea markets and it really shows that the aged appearance of the articles was achieved over time as it should be rather than being freshly painted and crudely scratched away at.

So if  you’re now finding yourself distantly dreaming of living somewhere as beautiful as Hope House, you might be thrilled to learn that you can have a taste of it as it is currently being rented as a holiday let. You can visit the official Hope House website for contact information and details on how to book.