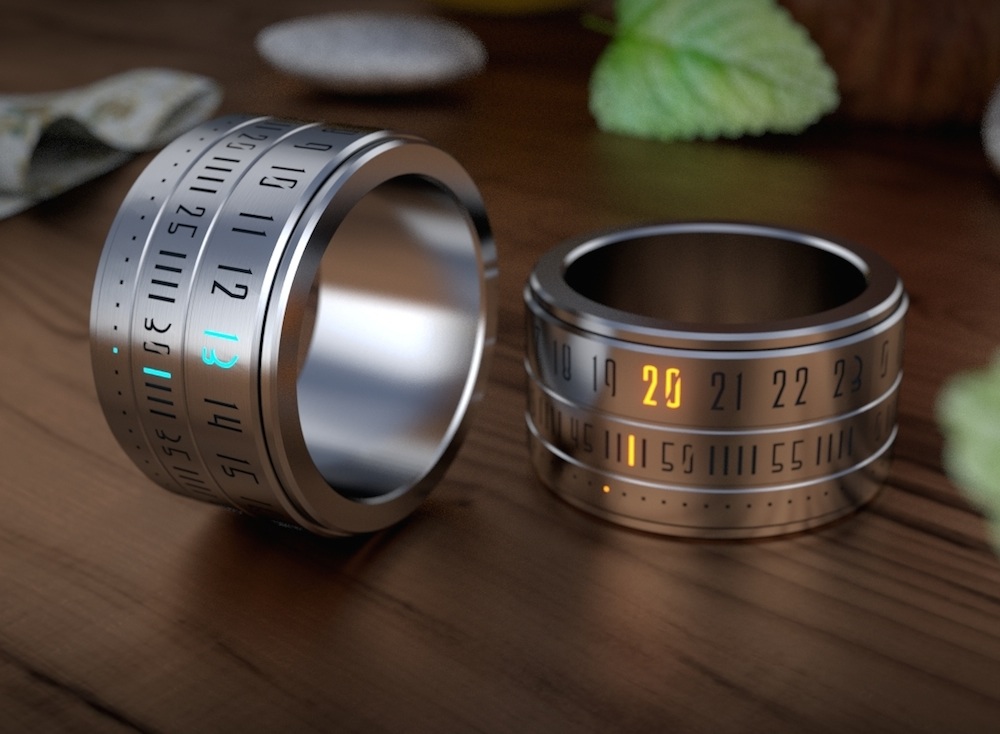 Ring Clock started out as a design concept for the Moving Innovation challenge held by CGSociety, which challenged entrants to visualise a design that could be possible to produce 10 years in the future. But due to the amount of interest Gusztav Szikszai’s renderings generated online, he set up a successful Indiegogo crowdfunding campaign two years later and the Ring Clock is now available to pre-order for $235. The ring comprises two independently moving parts, an inner section which is in contact with your finger, and an outer section which can be rotated freely. On this outer section are three rows of numbers which denote the time in hours, minutes and seconds through the use of orange or blue LEDs. These lights only come on when the ring is rotated to save energy. It’s worth noting that the numbers don’t always align, it’s just by chance in a lot of these pictures. The currently available Ring Clock doesn’t work in quite the same way as the original design concept in which the 3 rings could rotate independently to align the appropriate numbers. This was largely due to technical limitations, but Gusztav Szikszai still has another 8 years to iron these out while staying within his original 10 years in the future timeframe. He also plans to improve other aspects of the current Ring Clock in future iterations, namely the way Ring Clock is powered. It currently features an integrated rechargeable battery which is topped up by placing the device on a Qi wireless charging pad. But even rechargeable batteries wear out over time and users will have the option to send their Ring Clock back after roughly 3 years and have the battery replaced. This is due to the custom designed battery the ring watch uses as well as the difficult process of opening the casing, and will entail a fee of $25 + postage on either side. However Gusztav hopes that future versions of the Ring Clock might be able to avoid batteries altogether by taking advantage of the rotational kinetic energy required to activate the ring and harnessing it to power the LED lights. This draws humorous parallels with old fashioned wind-up watches and could prove to be a more elegant solution than conventional recharging.