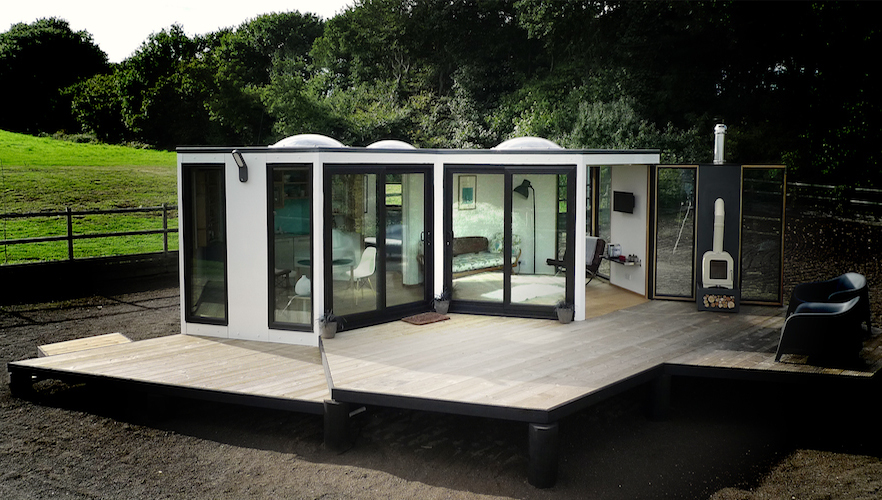 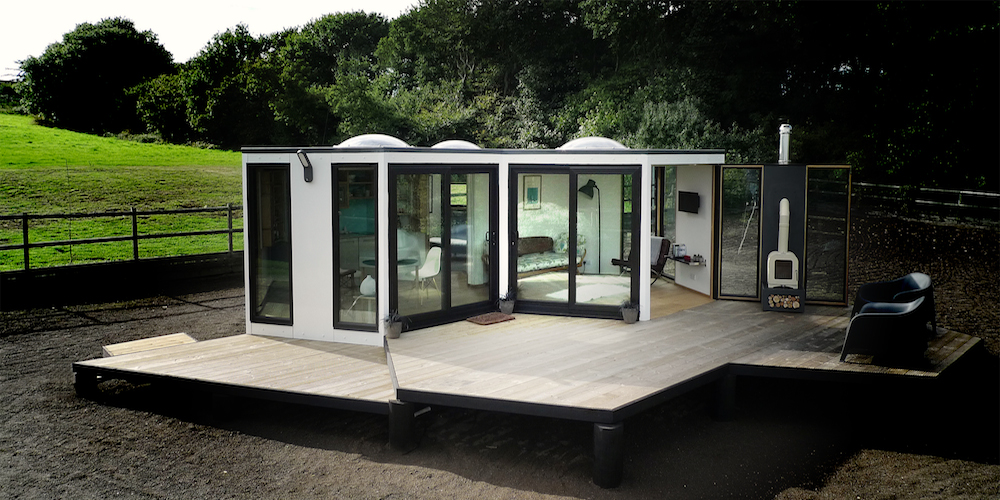 This modular prefabricated system is based on hexagons, often considered nature’s most efficient shape, to create a home not dissimilar to a beehive’s honeycombs. Hexagon modules have been used to great effect in the HiveHaus allowing a house with a small floor space to feel incredibly spacious.

Each room features several sets of wall-to-floor windows allowing plenty of light in and offering panoramic views. To save space sliding doors have been used between modules and circular skylight have been incorporated into every module giving the house an almost futuristic, Star Wars feel. 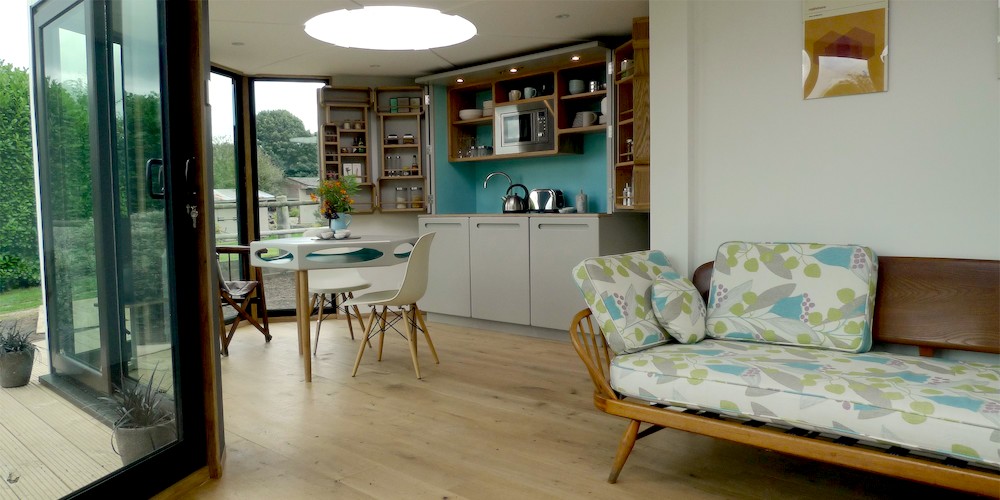 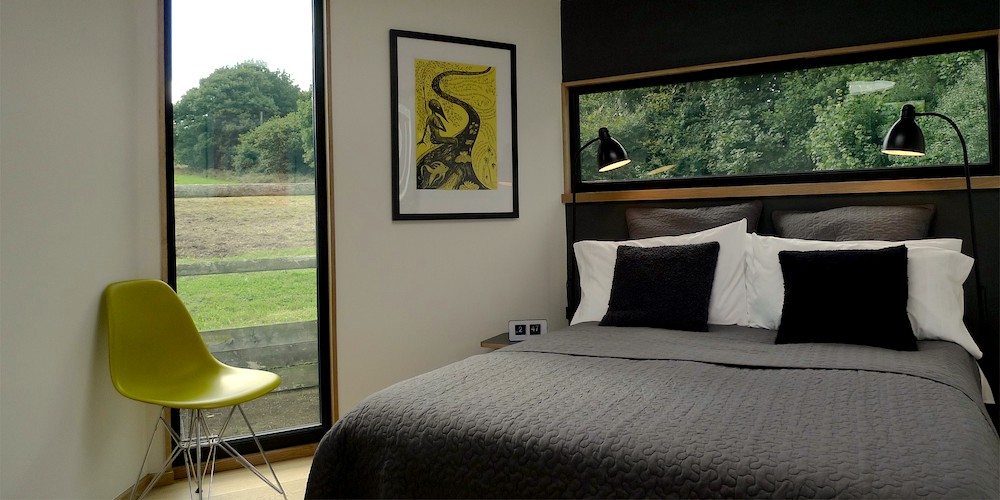 Hexagonal rooms might seem harder to furnish and live in than the rectangular spaces we have become accustomed to but they actually work really well in Barry Jackson’s HiveHaus. For example a hexagonal bedroom is perfect as the honeycomb shape allows the bed to be positioned in the middle of the room with the spaces on either side tapering in to allow access without wasting space.

Likewise the living space feels more cosy and communal as seating in a many-faceted room tends to point inwards. Extraordinarily, the rear wall which houses a log burning stove can be opened in its entirety. 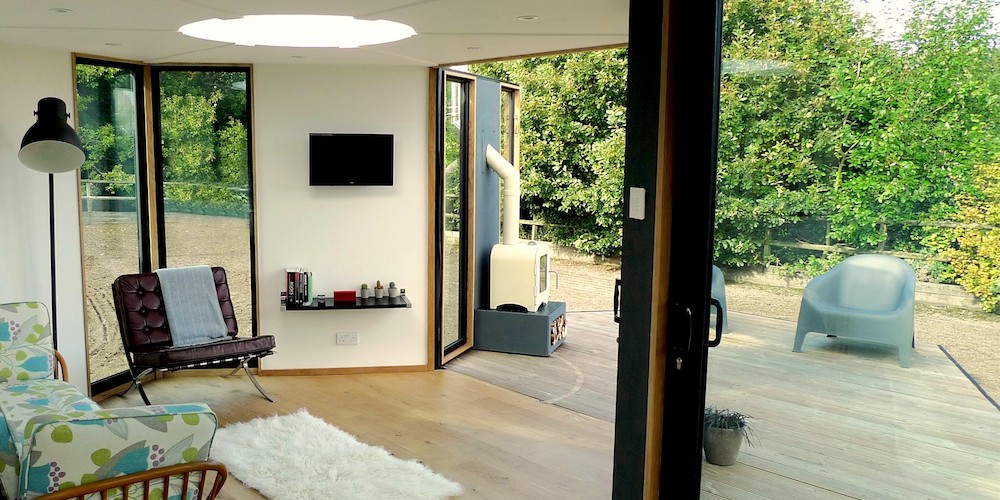 Hexagons to me are a far more practical and aesthetically pleasing shape than the often sought after circular or rounded rooms seen in modern architecture programs such as Grand Designs.

Rounded walls and windows are notoriously difficult – and therefor expensive – to build, and don’t have flat surfaces against which to position furniture leading to a lot of wasted space. The hexagon theme of HiveHaus even continues to the bathroom which features hexagonal tiles on its walls and floor. 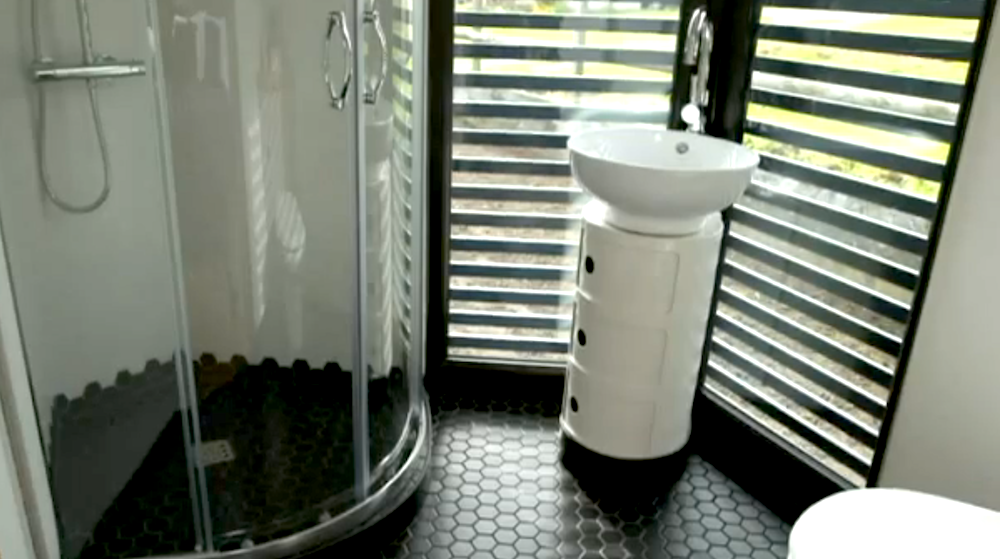 The only possible criticism I could have on HiveHaus is the quality of the exterior finishes, particularly the white plastic panels and the white fixtures holding them in place. In my opinion HiveHaus should have either tried to retain an industrial appearance and made these bolts a contrasting colour so as not to try and hide them or to try and achieve a minimalistic look by finding an alternative seamless solution.

Personally I’d love to see a white-washed cedar clad version. However this is merely a prototype of a low cost housing solution and so perhaps this kind of critique is misplaced. 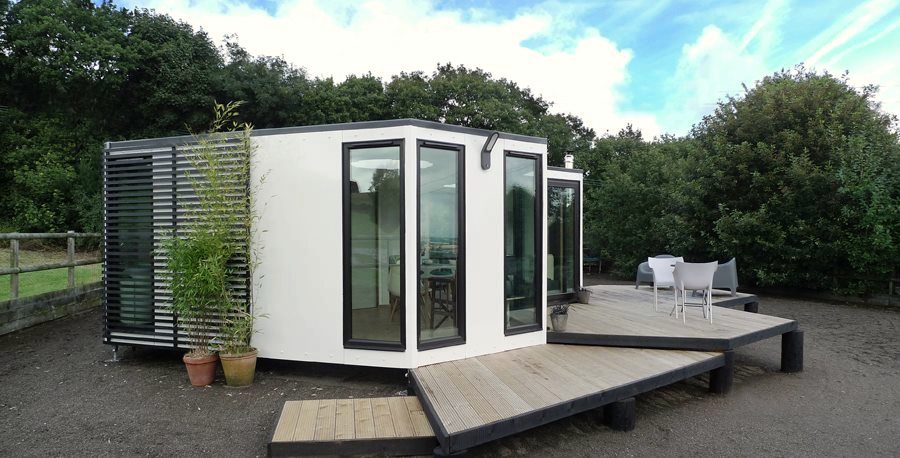 The HiveHaus was recently featured on Channel 4‘s George Clarke’s Amazing Space which you can view on YouTube here. It’s one of several small space projects featured in the program and so you’ll have to fast forward to the end to see the finished HiveHaus (although the programs are definitely worth a watch if you have time). Unfortunately I suspect these YouTube videos won’t be accessible to those outside of the UK but there are other ways to access the program online through less savoury routes.

UPDATE 30/04/2014: The aforementioned YouTube video is currently set as private but you can also view a lower quality capture of the George Clarke’s Amazing Spaces segment here, as well as a 10 minute clip of Barry Jackson showing some guests around his Hivehaus here. 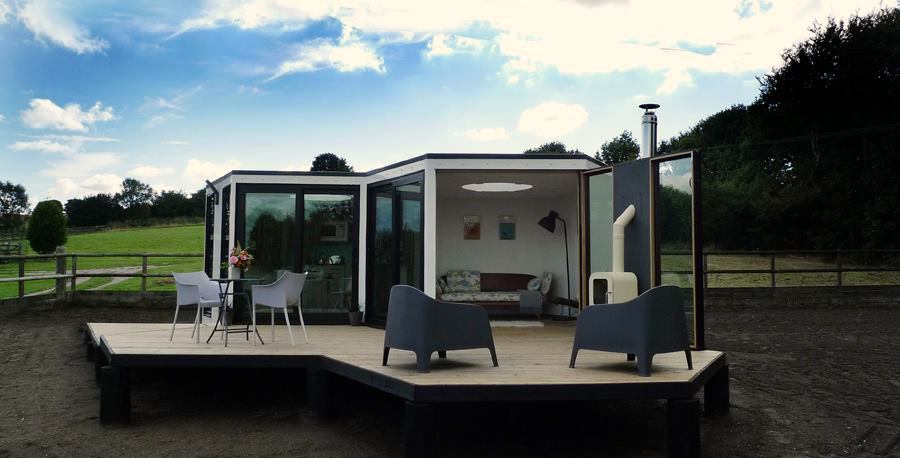 HiveHaus is a new modular building concept developed by Barry Jackson. This low cost housing solution has a lot of potential and to prove it, the designer remortgaged his house and built the first HiveHaus for his family home which can be expanded with more modules over time.

Detailed prices such as those offered by Ecospace aren’t yet available but it was briefly stated in the aforementioned program that each pod costs roughly £10,000. However it’s unclear as to whether this price includes any internal fittings and I suspect more complex modules such as bathroom pods would cost slightly more. Either way HiveHaus has the potential to be a remarkably low cost housing solution and as pondered on George Clarke’s Amazing Spaces: ‘Why hasn’t this been done before?’

UPDATE (30/04/2014): HiveHaus are currently working on a Configuration App for their modular living spaces to allow users to customise their own set ups. At first glance the application looks very detailed offering a vast array of build options, and users will be shown the cost of their creation’s materials within the app instantly. 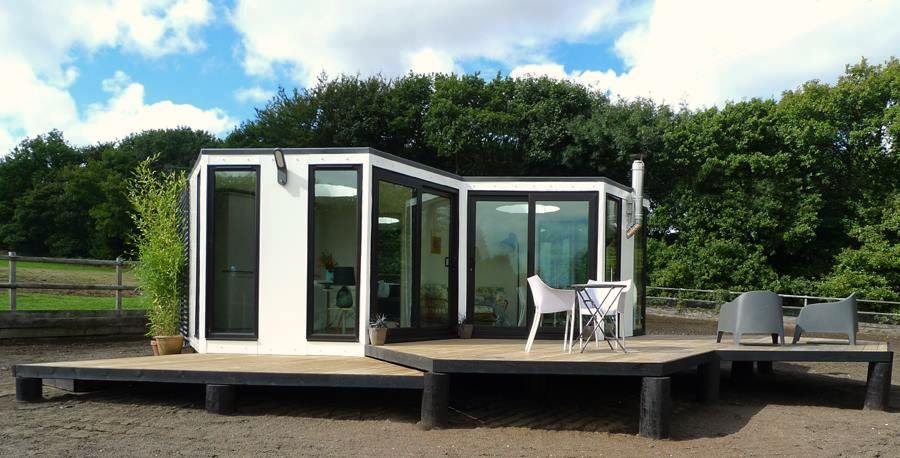 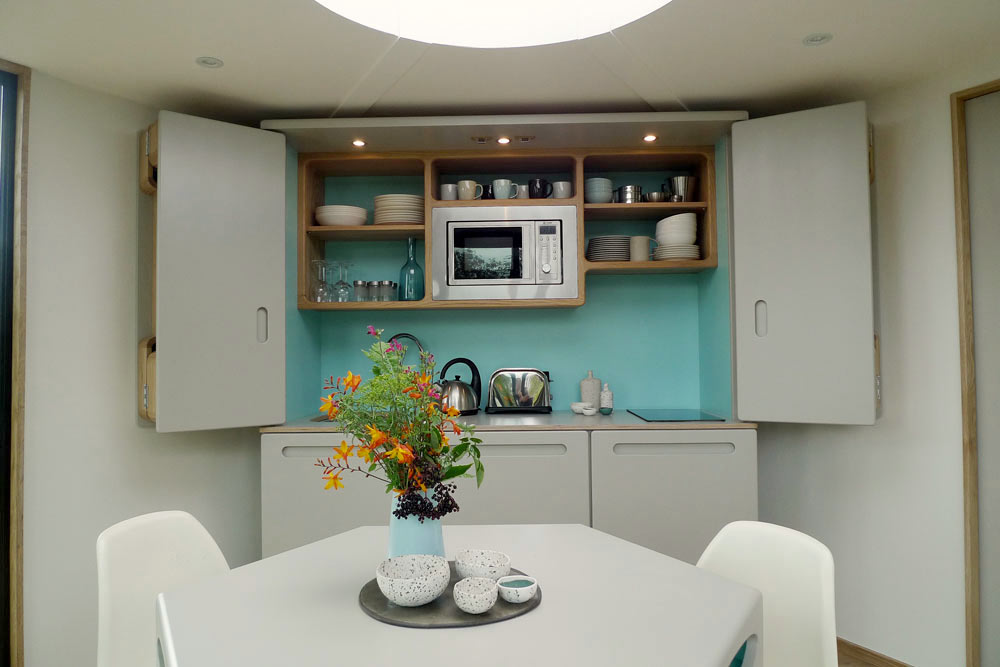 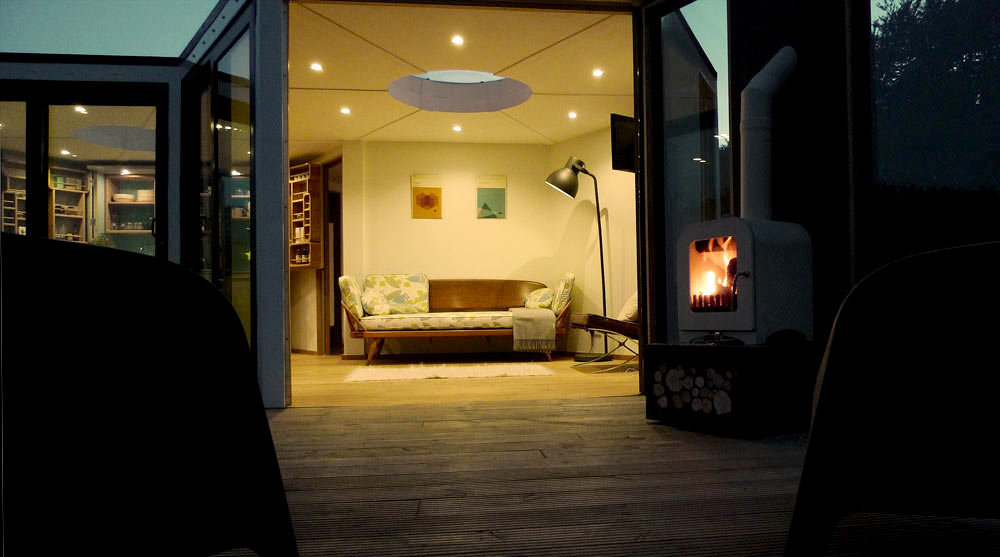