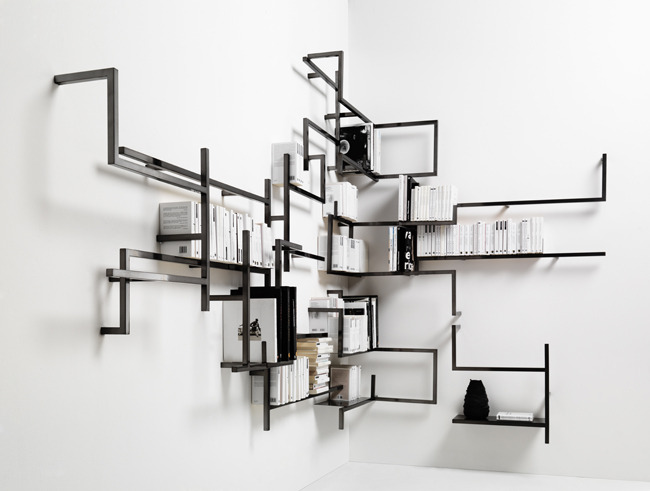 Italian designers Studio 14 designed this minimalist shelving system for Mogg with a modular framework that allows users to create their own compositions. The Antologia bookshelf is made up of 4 shape variants, all based on a right-angled line motif, which can be fixed to a surface making Antologia part furniture, part wall art. Antologia translates into english as anthology, a collection of literary works selected by a single person. The level of customisation afforded by the modular system makes this a particularly apt definition. The modules of Antologia Liberia are composed of iron bars which run perpendicular to one another. It’s worth noting that some of the modules come 10cm out from the wall, while others have a depth of 20cm, which allows the user to overlap them and nestle modules together. Essentially a complex storage matrix is created and in fact Studio 14 cited the Tron and Matrix films as inspirations for the shelf. Antologia is minimalist in terms of both aesthetics and function, and perhaps isn’t all that practical as a shelf. There are optional shelf panels on which you can place smaller items, but Antologia is primarily intended as a bookshelf with books simply resting on the bar and against the wall. This could cause balance issues with volumes that are either too big or too small – not exactly ideal. Designed by: Studio14
For: Mogg