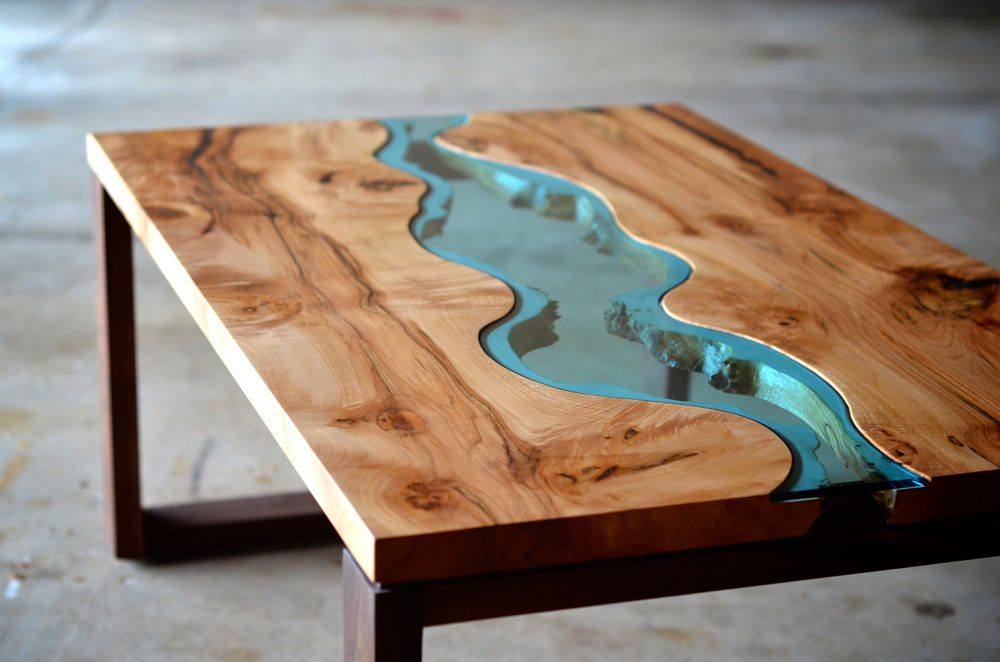 Greg Klassen is a masterful studio furniture maker who merges vast sections of gnarled hardwood timber with hand-cut glass panels to create tables which resemble rivers and lakes. He sees every piece of furniture he creates as a piece of functional art, and himself as a creator rather than a producer. Klassen actively seeks out the irregular edge sections of trees and deformed slabs of wood to create his unique river tables. These raw, ‘hard to work with’, and typically undesirable cuts might have splits, scars and holes (which he is keen to fill in with ‘lakes’). The varieties of timber used are mainly walnut and elm, as well as several other species of hardwood that grow locally to him in the Pacific Northwest. The collection is inspired by the exciting edges and vivid grains found in the trees sustainably taken from the banks of the Nooksack River that twists below my studio.Greg Klassen It might seem like an impossible feat to cut glass to fit perfectly between the two overtly irregular forms of these parallel slabs of wood, and although it is certainly no easy task, it is made possible by insetting the pane over a slightly larger area than the presented gap.

As the image below demonstrates, the glass is first cut to roughly match (and overlap) the natural shape of the opposing jagged timber sections. A guideline is then drawn around this fluid shape before a ‘flood plane’ is carved into the wood to allow the meandering glass pane to sit flush. Greg Klassen has so far produced more than 15 tables for his River Collection which he has sold for between approximately $4,000 and $9,000. However he has recently sourced a number of irregularly shaped exterior edge timber pieces and plans to create a lot more of his unique river tables after the amount of attention the initial run garnered. Klassen is also now catering to bespoke river table orders here.