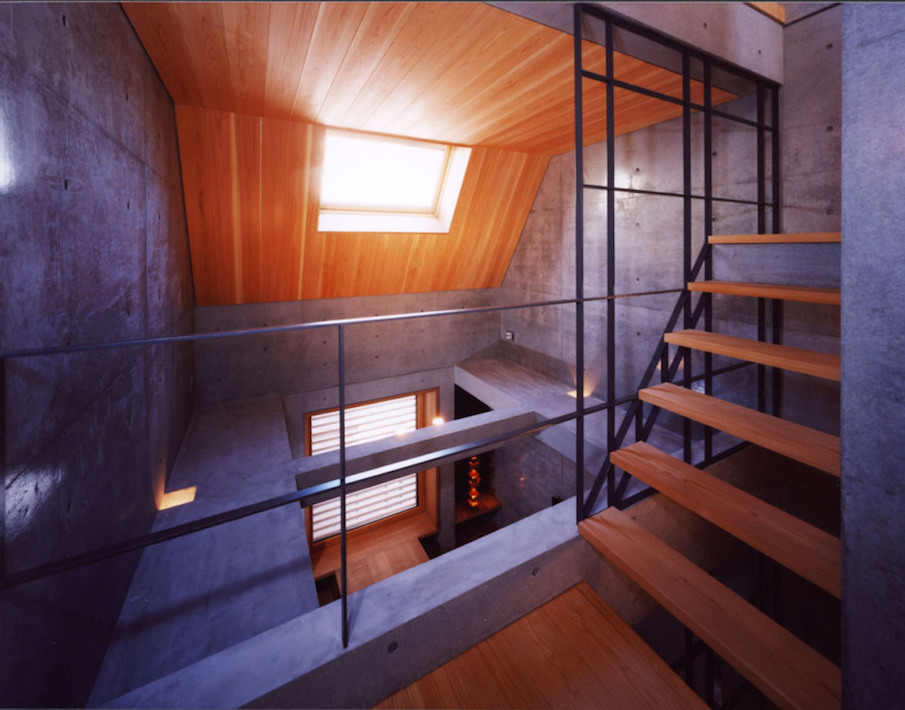 Seven was designed by Apollo Architects for a single resident who had grown up in Chiyoda, Tokyo and was determined to remain. However due to space limitations and the cost of living in the area she had to get a bit creative. By opting for a small plot and building upwards, a towering concrete townhouse was born. The plot on which Seven sits has an area of just 29m² and was allegedly used in the past to park a single car. However with some clever architecture and by spreading this towering townhouse over 5 floors, Seven has managed to achieve a total floor space of over 68m². It’s even been built as a detached house with what appear to be two super narrow alleyways running down either side which is an unusual luxury for a densely populated metropolitan area such as the Chiyoda ward of Tokyo. The front exterior of Seven is like nothing I’ve ever seen and is somewhat intimidating with its concrete facade, lack of visible windows and shadowy entrance. In fact in some ways it resembles a castle with the front door being deeply inset and the slatted wooden panel above looking like what could be a drawbridge or portcullis. These wooden slats are in fact fixed and merely serve to screen off a window adding a degree of privacy. Despite the extreme floorspace constraints, at no point does Seven feel cramped. The dining area even has a double height ceiling and the minimalist interior design style also serves to create a spacious uncluttered environment. An issue which befalls many tall houses built over multiple levels is that the staircases can end up taking a significant proportion of the already limited floorspace. One effective but costly solution is a lift or a bespoke spiral staircase that provides access to all floors. Another is steep staircases or even ladders, the former of which has been incorporated in the upper levels of Seven.

In the main living space of Seven, the staircase has become a desirable feature in itself with its elegant metal railings. These minimalistic but effective guards and the plank stairs still allow a clear view through the staircase which stops it becoming an overbearing fixture. Concrete and wood have been used in the interior design of Seven and there are virtually no decorative finishes such as paint. The concrete panels which make up the walls of the house are punctuated by the holes used to lift them into place by crane which gives it a very industrial feel. Sawara cypress wood was used throughout for the floors, ceilings and the slanted wall of the attic room which accommodates two broad skylight windows. The undeniably warm, golden tone of the wood contrasts strongly with the cold blueish grey colour of the concrete walls and ultimately balances out quite effectively.