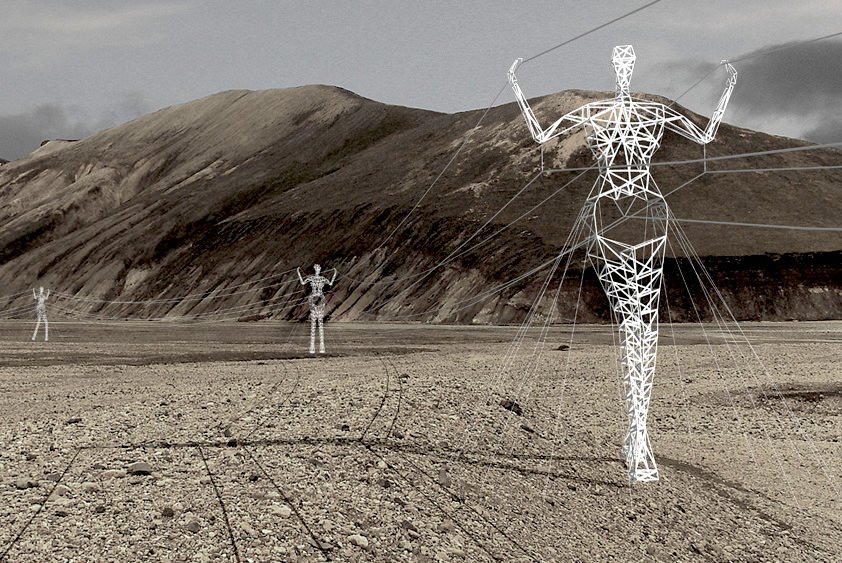 There are few things as universally loathed as electricity pylons, and a few years ago Iceland’s Landsnet held a competition calling on designers to create more aesthetically pleasing varieties. One notable entry was the sculptural giant pylons of Choi + Shine, and while their concept wasn’t ultimately built (no doubt due to its emphasis on appearance rather than utility), the design certainly garnered a lot of praise and attention.

Making only minor alterations to well established steel-framed tower design, we have created a series of towers that are powerful, solemn and variable. These iconic pylon-figures will become monuments in the landscape. Seeing the pylon- figures will become an unforgettable experience, elevating the towers to something more than merely a functional design of necessity.Choi + Shine People often assume that little to no attention was paid to the visual appeal of the transmission towers we see around us all the time, but a surprising amount of care actually went into their initial design. The archetypal steel lattice frameworks both minimise material usage, and also make the largely non-existant structures as transparent as possible.

The British design chosen in 1927 by leading architect Sir Reginald Blomfield sought to be more delicate than the brutalist structures used in Europe and the United States, and closer to the true sense of a pylon – an Egyptian gateway to the sun.Megan Lane, BBC News Website Choi + Shine’s human giant concept similarly incorporates steel latticework but takes the opportunity to inject an element of sculpture into these utilitarian servants. Two outstretched arms carry the cables, while two legs, spread apart as though the giant is walking, help form a sturdy foundation. The low-poly geometric style of the anatomical forms bares an abstract and minimalist persona up close, but does start to look more realistic when the pylons are viewed from a distance. The pylon-figures can be configured to respond to their environment with appropriate gestures. As the carried electrical lines ascend a hill, the pylon-figures change posture, imitating a climbing person. Over long spans, the pylon-figure stretches to gain increased height, crouches for increased strength or strains under the weight of the wires.Choi + Shine

Note that unlike most pylons currently in service, these human-form structures would require guylines for support as two legs obviously can’t distribute forces as well as the pyramidical forms of conventional pylons. This would no doubt hinder their adoption although it was reported that several major power companies were still interested in implementing the design due to the negative sentiment that the public currently has towards pylons. Simply colouring pylons white certainly does a lot to diminish their dominating presence on a landscape, although I would assume they are actually required to contrast with the sky from an air safety perspective.

Like the statues of Easter Island, it is envisioned that these one hundred and fifty foot tall, modern caryatids will take on a quiet authority, belonging to their landscape yet serving the people, silently transporting electricity across all terrain, day and night, sunshine or snow.Choi + Shine