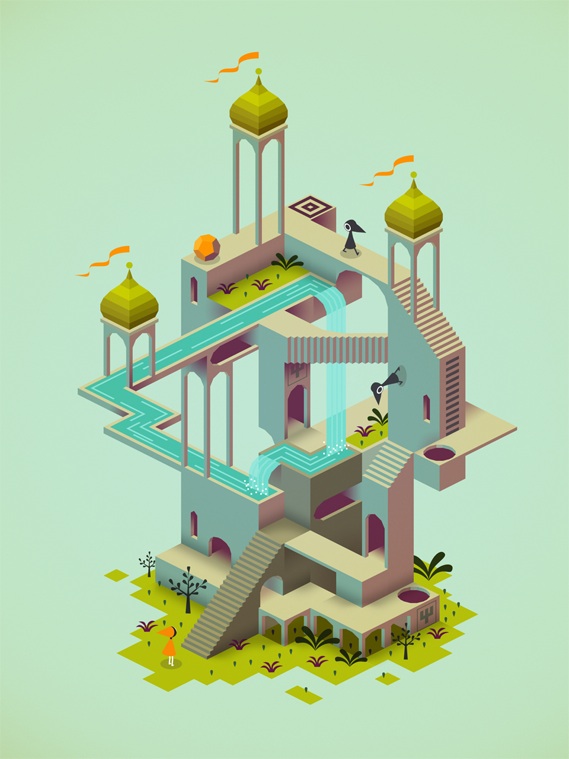 Ever wanted to climb inside an M.C. Escher drawing? Artwork from Monument Valley has increasingly been travelling through the Homeli Tumblr feed in recent days, and while the aesthetics had immediately grabbed me, I had assumed it was just the static work of a graphic designer. Little did I know, I’d soon be able to immerse myself in these vivid isometrically projected buildings through the now released iOS game Monument Valley. In the game you control princess Ida, occasionally accompanied by a friendly totem pole, who has to reach the top of some beautifully designed structures. Illusion, perspective and geometry play a key part in solving the puzzles that lead to the peaks, and as a result the controls for Monumental Valley are a pretty simple affair. They involve simply tapping the ground where you want Ida to walk to, as well as dragging elements of the levels such as wheels and sliders to alter the level’s structure and camera angle. It’s impossible to die in Monument Valley which is a welcomed anomaly in a platformer-style game with so many sheer drops. This allows you to relax into the game, play it at your own pace, and truly appreciate the aesthetics of the level design. Besides, its more of a puzzle game than a platformer and even the enemies, some black crow-like beings that patrol the levels, are only ever really a path blocking nuisance and actually help you with certain puzzles in the game. The levels of Monument Valley are reminiscent of M.C. Escher drawings with plenty of sideways stairs, looping waterfalls, and a thorough disregard for gravity. Impossible geometry illusions such as the Penrose Triangle play a big part in the puzzles of Monument Valley, and on several occasions they must be created by altering the camera angle to progress through the level.

“It happens that the way that you make computer games, and especially computer graphics, is a lot of illusions and magic tricks. So when it comes to making Monunment Valley it’s actually a really natural fit.” – Ken Wong “There was this idea at the start of the project that every screen of the game would be a work of art in itself. . . .  I think it’s a different way of approaching making a game, where the aesthetic experience is really driving the experience; every screenshot could be printed out and hung on a wall.” – Ken Wong

There’s a lot of truth in this, in fact throughout the game there’s a small record symbol in the top left corner which brings up a camera for you to capture your own screenshots of the sequences you find particularly visually pleasing. As is the case with the graphics and the controls, the storyline behind Monument Valley is also pretty minimalistic. There’s something about returning some stolen sacred geometry and seeking forgiveness, but this is only ever briefly mentioned and certainly isn’t an intrinsic aspect to the gameplay. Monument Valley is by far the most visually pleasing and mentally satisfying game I’ve ever had the privilege of playing, and is rivalled only by the cel shaded Legend of Zelda: Wind Waker. The music also creates a marvellous sense of ambience which is interspersed with seemingly random musical scales, being played on Japanese sounding string instruments, when elements of the levels are interacted with. Monument Valley costs £2.49 ($3.99 / €3.59) through the iOS App Store (Android coming soon), and although the game is admittedly short (I completed it in about 90 minutes at a relaxed pace) it is undoubtedly worth the money. A majority of people likely won’t venture into the marvel that is Monument Valley as a result of this up-front payment scheme in the age of the freemium, but it would certainly be a terrible waste to incorporate ads, or other such contrivances, into this work of art. Hopefully ustwo will either create a sequel or add new levels to Monument Valley in a future update. There are images of level designs that didn’t appear in the game, such as the ones pictured below, which would heavily hint at this possibility. ustwo have definitely hit on something special with this visual design format and it’d be amazing to see the Monument Valley universe extended to a non-linear, open-world style game similar to the Legend of Zelda with more of an in-depth story and quest style gameplay.