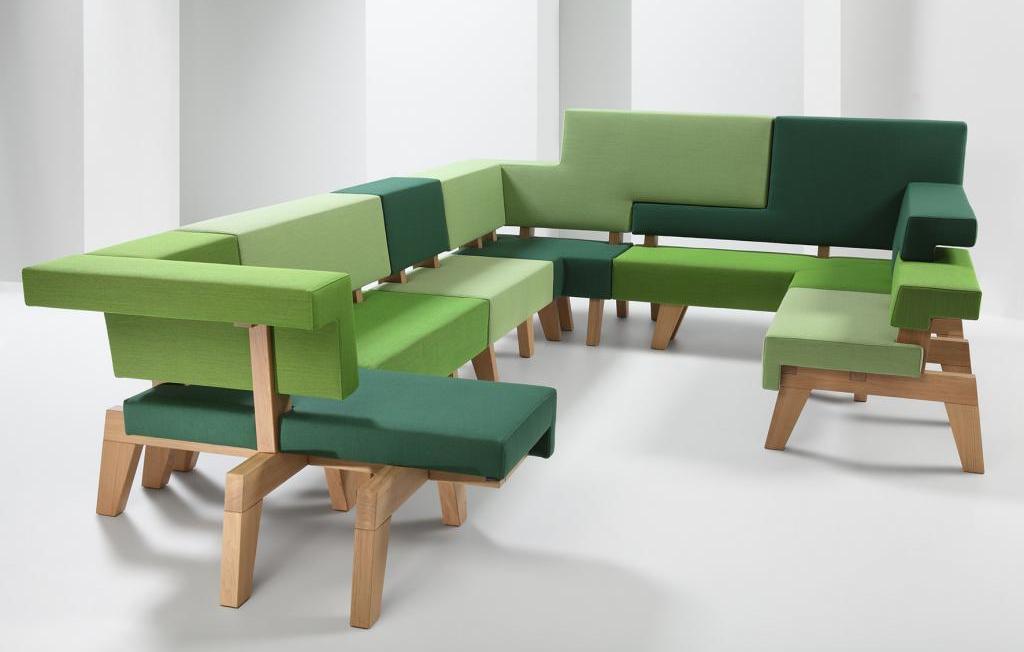 WorkSofa is a collection of angular seating segments which slot together, in a similar manner to blocks in a game of Tetris, to form various seating configurations. As the name would suggest, WorkSofa was primarily targeted towards corporate settings to provide areas for office workers to gather and discuss ideas. The WorkSofa system is made up of six different sofa modules with varying shapes and sizes which can be combined in a vast array of different configurations. The modular nature of WorkSofa allows the system to be used in unusually shaped spaces to create the most efficient seating arrangements. The high backs of some of the sofa modules are intended for leaning on, while the lower backs on other modules are wide enough to serve as table-like surfaces or even seats in themselves. Designers have to tread a tightrope when working on corporate and public space furniture; the piece needs to be accommodating enough to be comfortably sat on for a long period of time, but not so cosy that the user might start to doze off. WorkSofa seems to have gotten this balance right with its generously padded chunky upholstery, that also has a relatively sharp, angular form to keep the sitter upright and alert. WorkSofa was originally unveiled back in 2009 at the Milan Design Week as one of the first furniture lines from the PROOFF brand – in fact the full name of the range is ‘#002 WorkSofa’ and it was preceded by ‘#001 EarChair’. Both the WorkSofa series and EarChair were designed by Studio Makkink & Bey whose website you can visit here. Their site has quite an unorthodox navigation system, and is somewhat confusing, but there are loads of other great design projects on there.