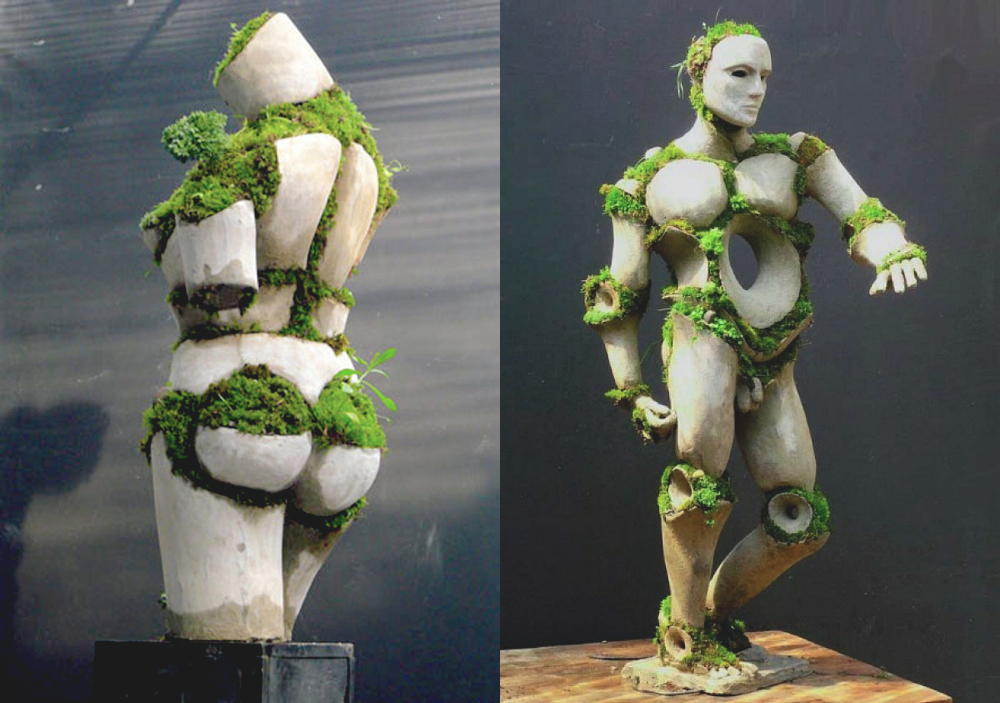 Terraform is a series of sculptures created by Robert Cannon which fuse the seemingly dichotomous mediums of concrete and plant. The sculptures feature moss, sedum and other small plant varieties at the points where adjacent hand sculpted concrete sections meet. These organic borders help define different portions of the sculpture, and the concrete contains complex integrated irrigation canals to sustain the plant life. The sculptures derive their name from the concept of terraforming: the act of modifying a planets topography, ecology, atmosphere and temperature to make it habitable. The theoretical term translates literally as ‘earth-shaping’ making it a particularly apt name for a series of sculptures. The Terraform sculptures make interesting use of hollow doughnut shaped concrete modules which comprise many of the anatomical joints of the living subjects. “We’re watching a change on the relationship between Men and Nature and this modification will be reflected on the global art.” “We’ve got to forget Post-Modernism; the Modernism isn’t dead, Ecological Art is the next chapter of its evolution and will be seen as the great artistic stream of this century.” Many of Robert Cannon’s Terraform sculptures run in a similar vein to Renaissance statue sculpture and focus on the human form, while others are distinctly abstract in composition. There’s something faintly post-apocalyptic about Terraform sculptures, with plant life recolonising man’s abandoned concrete structures, which actually occurred following the Chernobyl disaster. It’s not clear whether Robert Cannon and his team or artisans at the Opiary Studio are still active as his website is no longer active at the time of writing. I’ll include a link here incase this changes in the future, although Terraform works do appear to still be for sale through Bellissimo. These are mostly smaller scale Terraform sculptures such as the planters pictured directly above and below, and you’ll have to get in touch with Bellissimo via phone for any firm details. (via Asylum Art on Tumblr)