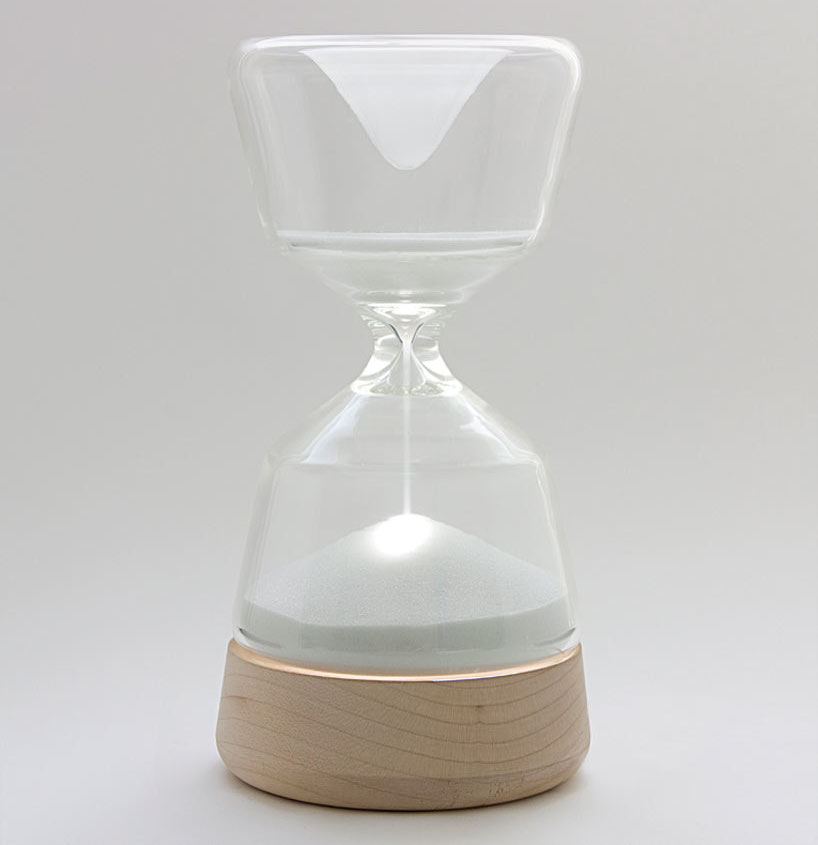 Ever been in bed, all cosy and about to fall asleep, when you realise that you’ve left a light on? Well this ingenious bedside light concept originally presented by Vanessa Hordies back in 2011 could hold the solution. The nightlight is built around the idea of a traditional hourglass, with grains of sand slowly falling to a lower chamber, and physically blocking out the light source as they accumulate around it. In a similar way to wake-up lights which gently coax you out of sleep in the morning, the Night Night Hourglass Light slowly dims and loosely simulates the sun’s setting. The use of sand also draws parallels with the European myth of the sandman who goes around sprinkling grains of sand into people’s eyes to bring on sleep. Likewise the hourglass itself is of course a significant icon often used to represent time, both in mythological imagery and in computer interfaces.

It’s been a major quandary, and for many their primary grievance with light’s remarkable speed of travel, that it is impossible to flip a light switch get into bed before the light goes out. I’m amazed light switch manufacturers haven’t met this demand already by simply incorporating 15 second delay options in switches, but the Night Night Hourglass can give you all of 15 minutes to get settled.

The Night Night Hourglass is double sided with light sources in both chambers of the hourglass shell. This means you don’t have to ‘recharge’ the light by remembering to flip it over to be ready for the next evening which is something I’m sure many, myself included, would neglect to do. The hourglass sits on a stationary wooden base but Vanessa Hordies doesn’t elaborate in her concept outline how the light is powered, whether it be through metal electrical conctact points, or through a form of wireless magnetic induction as is now often used in electric toothbrush chargers. Of course it would be a major of a waste of electricity if the lightbulb was still on after being submerged by sand so it is turned off after the 15 minutes have elapsed. Vanessa Hordies also doesn’t go into detail regarding how the lightbulb is electrically turned off after 15 minutes. I think I’d be quite disappointed, and feel as if the magic had been stripped away, if it emerged that it was simply operated by a computerised 15 minute timer.

A separate, although suspiciously similar, concept for an hourglass nightlight was later presented by Hye mi Lee in 2013, which proposes that the light’s on/off switch could be operated by a weighted platform that is triggered when a certain quantity of sand has reached the lower compartment. The 15minutes Light by Hye mi Lee is perhaps a more developed concept, but came two years after Vanessa Holdies’ original design and is too close for comfort in my opinion. Furthermore it just doesn’t have the same simple aesthetics and of course being asymmetrical, can’t be quickly flipped. The ability to adjust the speed of the sand’s movement is the only real upshot of 15minutes but this feature also strips away the element of simple intuitive operation from the light as well as its traditional hourglass charm.