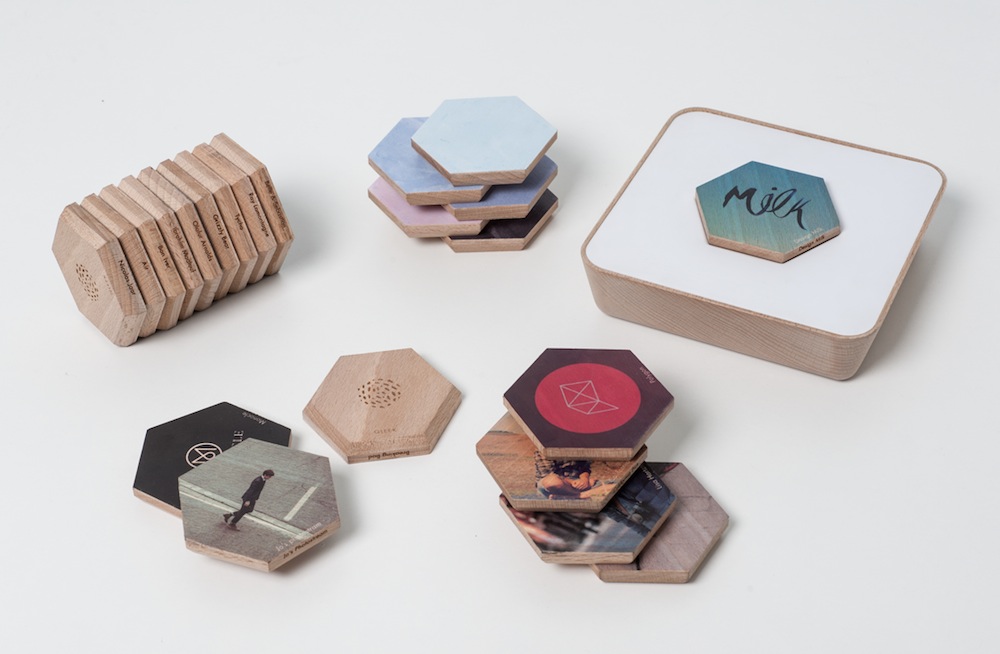 French design studio Ozenge have been hard at work creating what they see as a modern take on the bookshelf. Qleek sits somewhere in between the cloud and a vinyl library by allowing you to connect these hexagonal wooden tokens called Tapps to online media collections. You simply place a Tapp onto the reader and the corresponding online content, whether it be photos, music, video, or indeed some kind of digital media yet to be conceived, is played through a Bluetooth enabled TV or speakers. Being restricted to these physical tokens for our media collections might seem limiting in this digital age, but less is more and by opting to have a Tapp for only the best photos from your backpacking expedition, or a couple’s handpicked mixtape of ‘our songs’, we retain a sense of pride over our creations and they really feel like something special. “We distill in every piece of code we write and every piece of wood we carve a sense of simplicity that inspires authenticity and exudes a silent beauty from our products.” The project is currently raising funds on the crowdfunding platform Indiegogo and looks like it could very well meet its $70,000 target. Qleek at the moment has just under $45,000 with 19 days left to go and you can still grab yourself a Qleek set with an early bird discount for $199.

Qleek are preparing a Tapp store from which you’ll be able to order Tapps preloaded with commercial content, as well as having your own designs printed on blank Tapps. You’ll be able to log in to your Qleek account and update your existing Tapps at any time as well as sell your own creations. An interesting aspect to the cloud nature of Qleek is that artists could potentially sell a lifetime Tapp which could contain all of their previous albums and indeed any future material as it is released. This sort of system could really bridge the gap between legal downloads and a sense of ownership which current models fail to offer.

It’s worth noting however that the Tapps don’t actually store data like a CD would. Instead they serve as keys which map to online resources, whether it’s a series on Netflix, photo album, music playlist or blog. This has the advantage that you can edit and add to the content that the Tapp maps to, but it also erodes the sense of permanence, which is the in the end the biggest appeal of physical media to many. The internet is a dynamic place and services like Spotify, Netflix and Flickr on which your Tapp’s content can be hosted might not be around in 5 years time. The whole system might seem somewhat convuluted to some, and is sure to raise a few eyebrows, but I see Qleek more as an artistic concept or as a model of what the Internet of Things might have in store for us, than as a system that will realistically catch on. I certainly can’t see Qleek starting to feature in our everyday lives to the extent that you could hand someone a Tapp business card assuming they’ll have a reader – but who knows, crazier things have happened in the realm of technology.