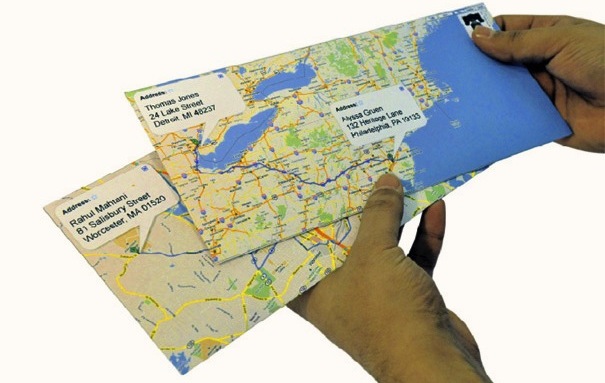 Google Maps Envelopes Beta was originally a concept by Rahul Mahtani and Yofred Moik at Syracuse University back in 2010. Unfortunately it never came to fruition as there were a lot of hindrances with the concept but there’s no reason you can’t try to make your own using the standard Google Maps directions interface. Note that this was never actually fully implemented, not even as an April Fool’s joke but it would definitely be ‘do-able’. However as many have speculated, the sender would have to live to the north-west of the recipient for the return address to be in the right place on the envelope, but it’s always possible to rotate the map. It could also be a solution to split-screen the envelope which would work well for international sending too. There’s also the issue of the cluttered envelope confusing automated OCR postal sorting machines and even postal workers themselves! Someone has already gone ahead and made their own slightly different version as a webapp called Map Envelope which while not looking quite as spectacular, overcomes a lot of the aforementioned issues. As far as I can see this version only takes one address but it automatically turns the map into the outline plan of an envelope with lines you can cut out and fold. This could be particularly good for event invitations that you want to stand out and have that special something. It wouldn’t be much more work to print 100 of these than it would to make one as all the orienteering is done and these envelopes also obviously give the directions to your house or the venue!