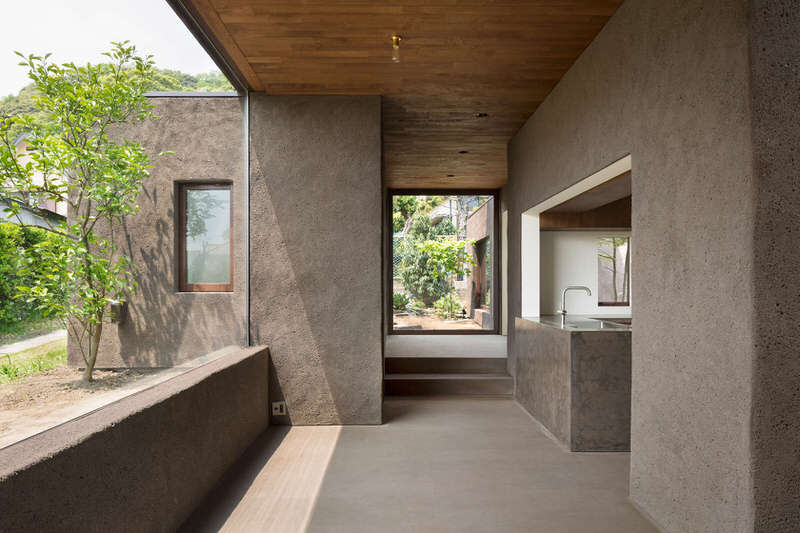 Dorell Ghotmeh Tane Architects were tasked with designing a residence for a specific site in Oiso, Japan that both respected the land it is situated on and would remain after 100 years. DGT combined elements from several different archetypes of Japanese dwellings that had defined the Oiso vernacular over the past two millennia to create this unusual but surprisingly practical residence. Oiso House is situated on a slightly sloping site resulting in a large portion of the elongated floor plan being inset approximately 60cm into the ground. This provides both passive insulating properties to the ground floor and reduces the overall height of the structure, with much of the displaced earth being used in rendering the four cubic ground floor volumes. The house is designed for a specific place. Once the place has been decided, we never change it again – we can’t choose from a neighboring place. The building belongs not only to the site, but also to the past and to the surrounding land.DGT Architects The overall appearance of the finished dwelling remained surprisingly similar to its overtly basic architectural model (pictured above), in which a simple wooden segment was rested on top of a couple of stone blocks. This is indicative of the elegantly simple design of Oiso House with its natural material palette of timber and rendered earth. In terms of its composition Oiso House might seem starkly modern, with several distinctly angular volumes, and a somewhat discordant wooden shed-like structure apparently dropped on top as an afterthought. But this design decision is actually a reference to a relic of Japanese architecture, in which simple houses were built on top of raised earth mounds in order to avoid the effects of seasonal flooding. The people of Oiso experimented with many different forms of housing, such as pit-dwellings, raised-floor dwellings, dug-standing pillar buildings, machiya (traditional merchant houses), architecture of villa and so on. Then we got one idea: we want to design a ‘Japanese House’ of the living form, which captures the essence of Japan from all ages.DGT Architects