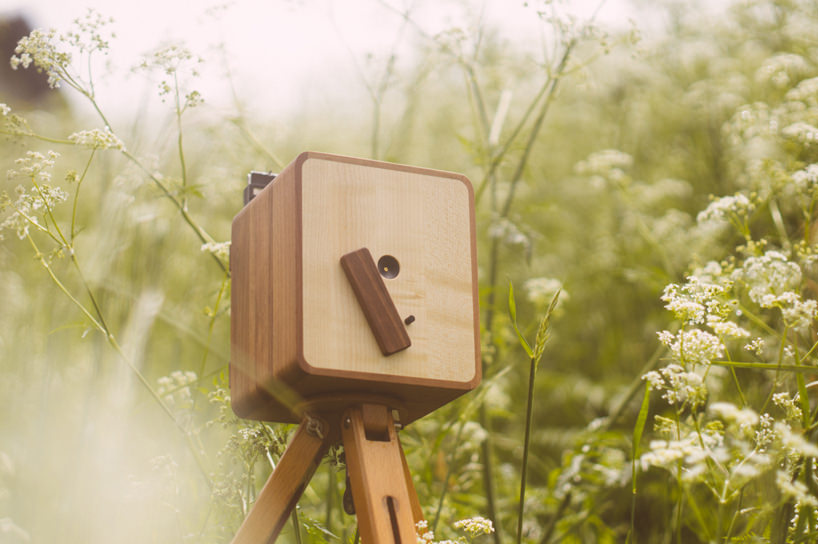 ONDU set out to resurrect the dying art of pinhole photography by creating a series of solid wood cameras requiring absolutely no electrical components. Light enters the wooden box through a pinhole aperture, with an exposure ranging from a second or two on a sunny day, to several minutes in low light conditions. As there are no electrics or other automation in the cameras, the film is wound manually using the two wooden dials at the top, and the shutter is opened and closed with a simple finger movement. All ONDU’s pinhole cameras handmade in their workshop in Slovenia from walnut and maple wood (shown in the video above). The cameras employ magnets to seal the backplate and to hold the exposure shutter strip in its two position, but the devices remain delightfully lo-tech. The pictures produced through ONDU pinhole photography are uniquely atmospheric with surreal qualities that even Instagram’s most outlandish filters couldn’t dream of emulating. However a lot is skill and practice is required to get a sense of exposure times. Jeff Guyer shares his hands-on experiences with an Ondu pinhole camera brilliantly in this review from diyphotography.net:

Pinhole photography isn’t as easy at it sounds. It’s easy to get frustrated. There’s no viewfinder. No way to check yourself. No dials. No buttons. No settings. Just a tiny pinhole and a cover. Open the cover at the beginning of the exposure, and close it at the end. Maybe two seconds on a sunny day, or two minutes at sunset. A tripod is essential. Even the slightest movement can be the difference between success and failure. Your first few rolls may come back with no usable images at all.

Over time, though, something really cool happens– you start trusting your instincts and learn from the mistakes. The two sample images below were the only usable frames of the entire first test roll. Everything else was either over or underexposed. Percentages like that would obviously frustrate the hell out of me with a regular film camera, but with a pinhole it feels like I won the lottery.Jeff Guyer

ONDU’s pinhole camera series was launched by a Kickstarter campaign back in 2013, and their wide range of pinhole cameras can now be purchased in a more conventional online shop after a second round of crowdfunding in 2015. The cameras pictured here are the second iteration of the design with field of view indicators, a spirit level and a smoother exposure strip.

The sizes and prices of their wooden pinhole cameras vary widely, ranging from $70 for their 135 Pocket camera up to $300 for their 8×10 Giant model. The series is interspersed with various Trifocus options as well as a 6×17 Ondurama camera for panoramic shots.