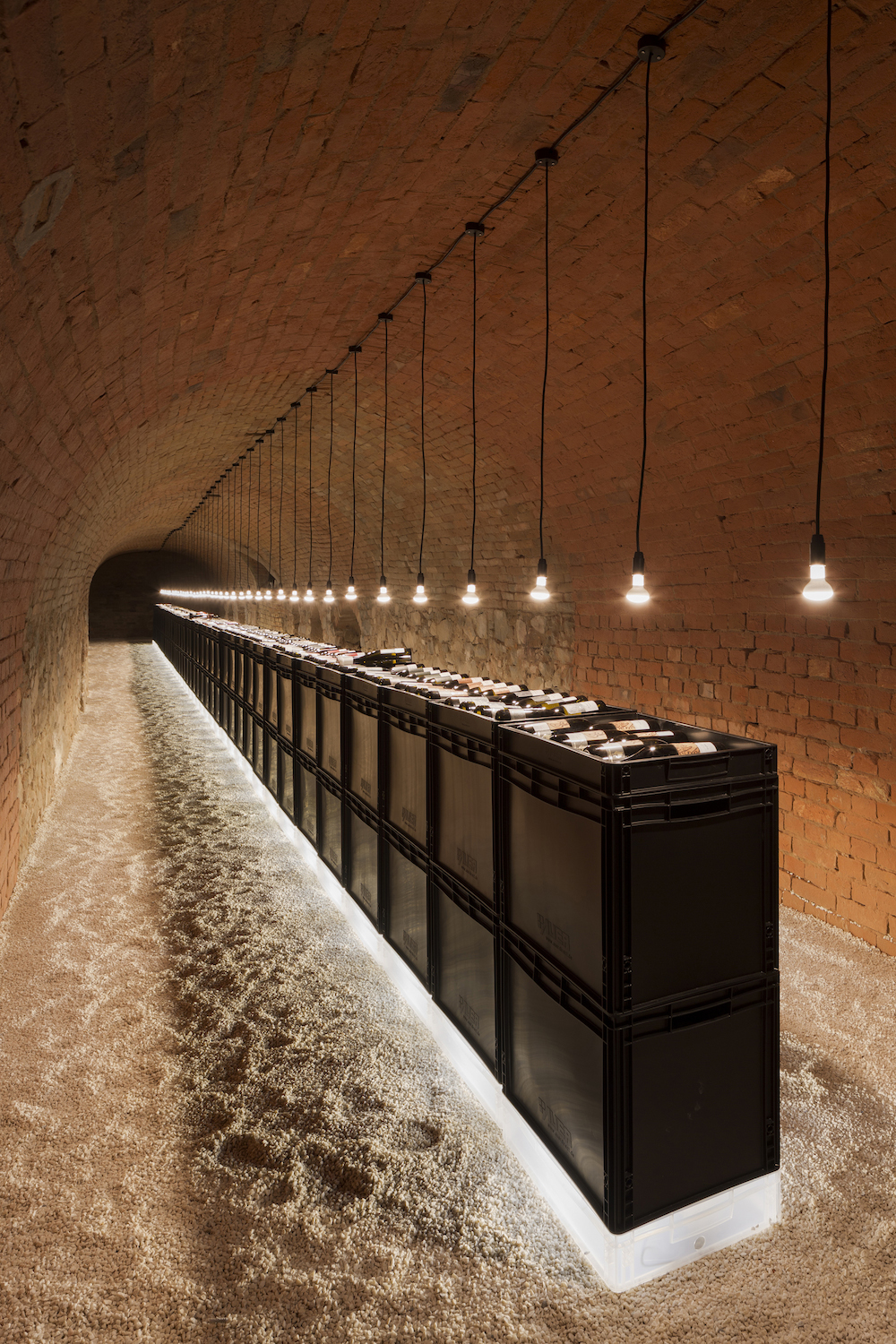 The Strobl Winery in Wagram, Austria received a stunning renovation last year at the hands of March Guy and Wolfgang Wimmer. This wasn’t intended as a residential dwelling, more to serve as a location of Clemens Strobl Winery for storing wine in its lengthy tunnel cellar and to host wine tasting sessions. There is also temporary accommodation upstairs in the form of two concealed beds built into the floor and a shower room for occasional overnight stays.

It’s somewhat hard to believe that the front and rear exteriors belong to the same building. Indeed the front facade was part of an existing wine cellar and has been carefully renovated to its former glory with a lick of paint and the restoration of its traditional Austrian features such as the shutters and rendered cornicing.

At the rear of the Strobl Winery a modern and minimalistic extension was built with lots of clean angular lines and a full-wall window with views over the adjacent vineyard. The roof of the modern extension has a much gentler gradient that the traditional pitched roof and affords the living area much more space without being visible from the road or making the building higher. The Clemens Strobl Winery is foremost a wine tasting centre for the company’s products and March Gut designed this luxurious interior to put an emphasis on the wine experience. The tasting room is decked out in minimalist wood panels with copper pendant lights and features a large chiller fridge and a modern corner fireplace. A large set of double doors lead down to the expansive wine cellar which from my estimation appears to be around 30m-50m long. The ceiling of the tunnel is composed of arched brickwork and was pre-existing prior to the renovation although the sudden change in brick colour indicates that the tunnel cellar was likely extended at some point. The bottled wine is presented in a long line of cases which runs down the centre of the tunnel and are illuminated by a row of minimalistic pendant lights.

The floor of the tunnel is gravel which is a common feature of traditional wine cellars. Not only does the medium-grain gravel help regulate humidity but it also provides a relatively soft landing for any dropped bottles and usually stops them breaking. Wine cellars also tend to be underground as this makes them less susceptible to rapid temperature changes which can affect a wine’s maturing. Wagram, Austria where the Clemens Strobl Winery was built is a well known wine producing region and so these kinds of traditional cellars were commonplace. Concealed beds built into the floor under fold-out wooden panels allow the upstairs to serve as temporary accommodation. I bet these hidden beds get a fair bit of use with people who end up going over the drink driving limit and have to spend the night.

There’s also a shower room which looks ultra-clean and minimalist to the point of extent of appearing clinical. It might just be that the mint green colour resembles nurse’s scrubs and that the utilitarian clean, white, featureless, fixtures including the shower, taps and even the door handles look like hospital hardware. However there’s also something quite reassuring about this. Hospitals look utilitarian for a reason: to be sterile, and who doesn’t want a clean bathroom? The first floor provides a comfortable yet modern open plan living area with a sofa, dining table and kitchen for entertaining guests and providing fine food. Base Nud Collection concrete pendant lights were used over the dining table and ambient lighting from the ceiling edges has also been used to great effect.