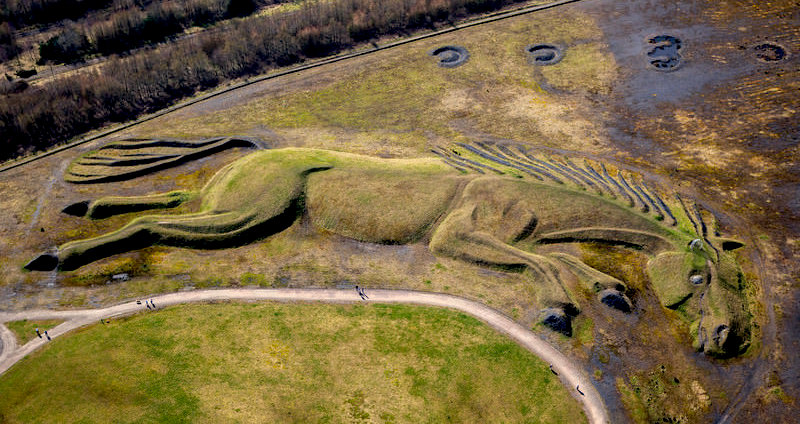 This prancing pony is a 200 metre long raised-earth artwork by Mick Petts that was completed over a period of 3 years. The earthwork is a homage to the pit pony, the last of which was retired in 1999. These animals were used to haul containers of coal in underground coal mines, and the locals later dubbed Mick Petts work ‘Sultan’ after a particularly famous local pit pony. The raised-earth sculpture was completed in 1999 but artist Mick Petts has since designed a number of other Animalia-inspired structures and earthworks including a boar shaped amphitheatre as well as a timber bird observatory building resembling a Marsh Harrier. ‘Sultan the Pit Pony’ isn’t purely for aesthetics though, this sculptural earthwork also serves a purpose: it is adjacent to Parc Penallta and is intended to act as a windbreaker for the events arena. This kind of landmark is of course inspired by the ancient white horses emblazoned on hillsides across Britain. However its worth noting that these forms were produced by removing the top layer of soil and infilling the trenches with white chalk, whilst Mick Petts earthwork is additive, being composed of mounds of coal shale rock — 60,000 tons worth! Petts’ pony is of course also a lot more elaborate than the Uffington White Horse, and modern computer technology, machinery, as well as of course the ability to fly and see the earthwork from above no doubt helped. These photographs were captured by Steve Brockett, an aerial photographer who relies on paragliding for a lot of his work.