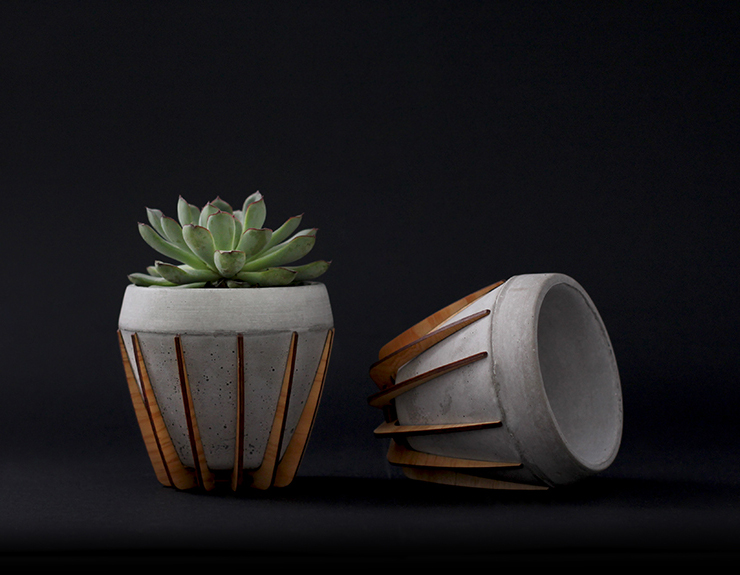 “Long has concrete been regarded as a cold and industrial material. We believe its manual processes and properties, however, make it a modern, expressive and rich substance fit for many objects that have not yet been explored.” – Shift Shift point out that concrete and wood, two materials which have become ubiquitous with modern industrial design are rarely used together. Concrete’s castable properties mean designers often want mould an entire furniture piece in one pour or to embed other components in the cement when wet. However wood’s tendency to shrink and expand – coupled with concrete’s tendency not to – make them incompatible for embedding. Wood that swells due to moisture absorption easily has the potential to crack surrounding concrete. The La Morena pot instead features these two materials as two separate components: a cast concrete plant pot and a nesting cradle made of laser cut wood. The use of wood adds an organic quality to La Morena and the designers at Shift likened its shape to the agave plant. The wooden cradle also levitates the concrete pot which serves to prevent this brutally hard material from scratching the surfaces such as the tables and window ledges on which the La Morena pot is to be placed. Shift set out to reinvent concrete as a “highly aesthetic, modern and friendly component” and remove notions of it being a “cold and industrial material”. In the case of the La Morena plant pot I don’t think they’ve really succeeded at this as the playful and organic qualities come from the wooden cradle rather than the concrete itself. However La Morena is certainly a minimalist masterpiece nevertheless and as a complete piece of design is ultimately fun and very aesthetic.