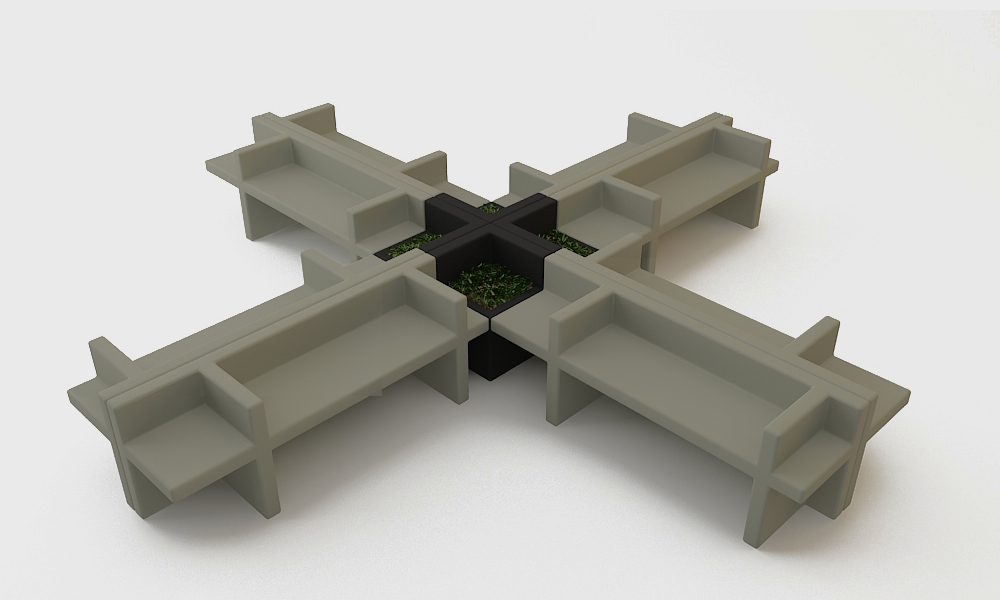 Infinite Benches are a modular system devised by Nazar Sigaher which revolves around a single minimalistic concrete form which can be repeated to create many different seating configurations. The simple base shape is made up of four intersecting planes that run in all three dimensions to ultimately form a bench with three distinct divided seating areas.

The choice of concrete material, particularly if it were reinforced with rebar, would make Infinite benches virtually indestructible which unfortunately is a requirement in public places. The repeated modular shape makes it possible for city authorities to order the same bench in large quantities and then simply arrange them however would best occupy a particular area. The tree planter modules would also make it possible to add natural green elements to city environments and their portability could make their maintenance more efficient. Thick vertical planes act as dividers and could make strangers feel less awkward sitting next to each other if Infinite benches were to be used in public spaces. These ‘party walls’ are a much simpler solution than other concepts which have been presented such as this flipping over-the-top (quite literally) public seating. Seriously how awkward would it be going up to one of these flip benches and basically implying to the present occupant ‘I don’t want to sit next to you and I’m prepared to rearrange this piece of furniture to avoid it.’ Talk about an alienated society. However as these benches are made of concrete, it wouldn’t really be practical to rearrange them at home to form different configurations once installed due to their weight. This is a real shame as the potential to regularly form different shapes with these modular benches is their main appeal. This could be overcome by making the same modular shapes out of lighter materials such as treated timber or perhaps even low-grade, but strong, recycled plastic.

The Infinite bench concept was developed by Nazar Sigaher whose work I’ve only just recently discovered. I’m a big fan of a lot of his designs and we’ll be featuring several of them on Homeli over the coming weeks. Stay tuned and like us on Facebook to keep up to date.