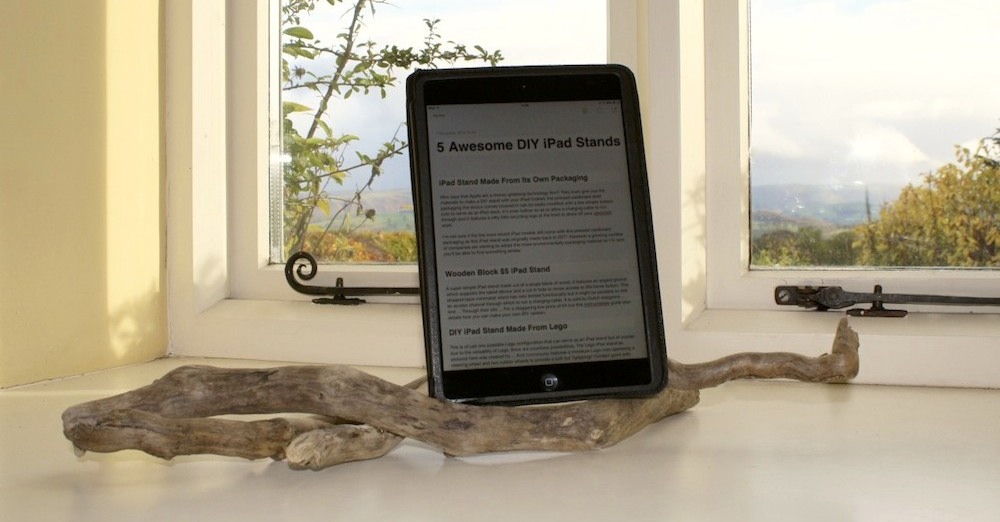 iPad Stand Made From Its Own Packaging

Who says that Apple sell over-priced hardware? They even give you the materials with your iPad to make your very own DIY stand! Indeed, the pressed cardboard shell packaging the device comes incased in can be easily modified with a few simple scissor cuts to serve as an iPad dock. It’s even hollow so as to allow a charging cable to run through and it features a nifty little recycling logo at the front to show off your upcycled work.

I’m not sure if the the more recent iPad models still come with this pressed cardboard packaging as this iPad stand was originally made back in 2010 by Ian Collins. However a growing number of companies are starting to adopt this more environmentally packaging material so I’m sure you’ll be able to find something similar. Made of 3 sticks of driftwood held together by a few dabs of superglue, this is a relatively simple stand. The only real difficulty was met when trying to arrange these 3 driftwood sticks so that they would both hold an iPad in place and remain upright which is no easy task when dealing with natural, unfinished, and most of all irregular materials. I actually own this iPad stand which was made for me by my girlfriend Malou. This must be the most high-end looking iPad stand in this list, quite possibly in the world. But making this concrete iPad stand is certainly a more involved DIY project requiring you to make your own mould and cast concrete with an inset glass ledge on which the iPad rests.

The somewhat monolithic shape of the stand was achieved by using a plastic popcorn container which are readily available in the US for $1 but overseas readers might find it hard to locate. Of course pretty much any container can be used though with slight variations then needing to be made for the dimensions of the other components.

A super simple iPad stand made out of a single block of wood, it features an angled groove which supports the tablet device and a cut in hole to revise access to the home button. This stripped back minimalist stand has very limited functionality but it might be possible to drill an access channel through which to run a charging cable. It is sold by Dutch designers Martijn Aslander and Simon Blazerhrough their site Lifehackingshop.nl for the staggering low price of €4 but this Instructables guide also details how you can make your own DIY version.

DIY iPad Stand Made From Lego This is of just one possible Lego configuration that can serve as an iPad stand but of course due to the versatility of Lego, there are countless possibilities. The Lego iPad stand as pictured here was created by Jeff Eaton and humorously features a miniature Lego man operating a steering wheel and two rubber wheels to provide a soft but firm contact point with the back of the device.