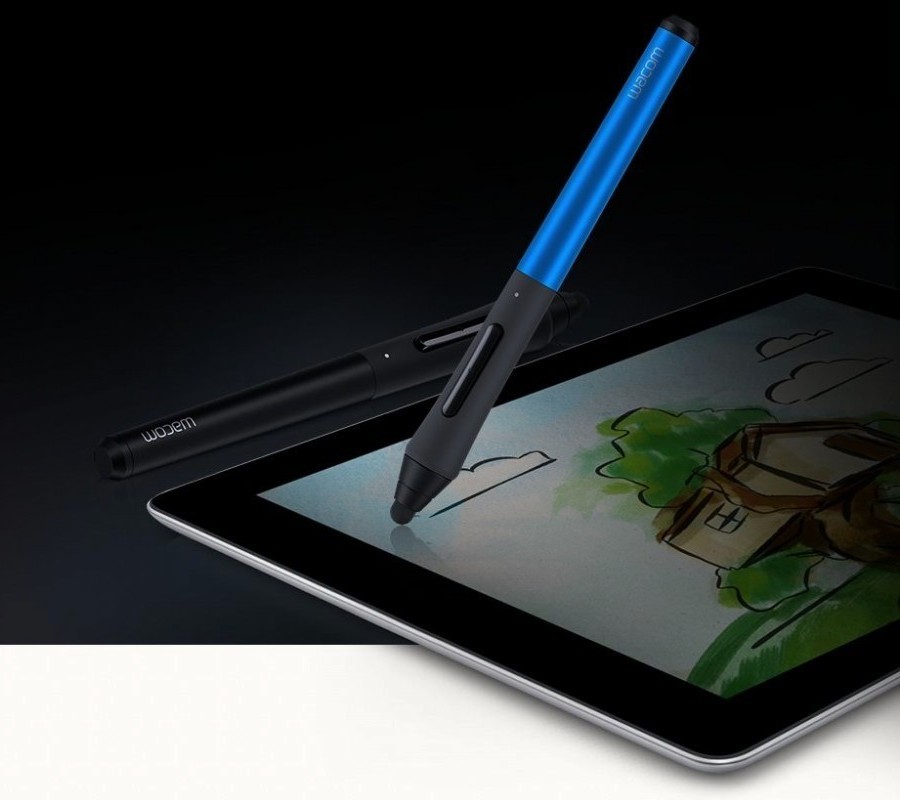 The Wacom Intuos Creative Stylus (Wacom ICS) is a smart stylus for iPad which connects via Bluetooth 4.0 and brings pressure sensitivity to the device. The pressure sensor has 2048 levels of sensitivity – not that you’d be able to count them all, but it means that the resolution is there to get great sweeping strokes which vary in thickness and opacity in your favourite painting apps. It’s priced quite reasonably at $100 (£60) which doesn’t exactly put it out of reach of non-professional illustrators but probably isn’t something a casual iPad user would want to invest in.

The stylus also features two buttons on its side which have turned out to be a great feature and even more useful than I thought they’d be. For example in the Procreate iPad app I’ve set one of them to undo the previous action and the other two open and close the colour selection pane. This makes creating in Procreate very quick and intuitive (I’d say natural but this sort of added functionality obviously doesn’t exist in real-world drawing). As for ergonomics, the stylus is very comfortable to hold. The lower portion is made of a soft, smooth rubbery material which affords some grip but the stylus also gets thicker towards the tip which stops your fingers sliding all the way down.

When I first started using the Wacom Intuos Creative Stylus I kept accidentally pressing the buttons when drawing as they fall exactly where you grip the stylus. However this is very easy to get used to as it can either be rotated so the buttons aren’t where your fingers make contact or you can hold the stylus lightly so as not to press them.

The shaft of the stylus is completely round making it liable to roll away when you put it down. FiftyThree combatted this rolling away issue brilliantly with their Pencil by 53 stylus which has a flat shape much like a traditional carpenter’s pencil. Most styluses at least have a clip to stop this happening which are also useful for attaching a stylus to your iPad cover; the Wacom Intuos stylus also lacks a magnetic feature for this.

As a premium quality Bluetooth stylus, the Wacom Intuos Creative Stylus comes with a sleek case with a super smooth lining made of a silicone-like material. Not only does the case accommodates the stylus, it also comes with two replacement nibs and houses a spare AAAA battery (yes that’s 4a’s, bit of a nuisance but Amazon sell them). The case might seem like a superfluous detail but as some have pointed out it is quite necessary. The stylus lacks an off button instead automatically turning itself off after inactivity as the Bluetooth 4.0 technology is very low-powered and so doesn’t drain too much battery. However whenever either the tip or the buttons on the side get pressed, the device powers up again and the lights start flashing. If your stylus is knocking about in your pocket or bag all day, it’s bound to drain the power eventually.

I bought the Wacom ICS primarily to use with the Procreate app on the iPad with which it works seamlessly supporting both pressure sensitivity and offering the ability to assign the two buttons on the side to various tasks. Wacom did also make their own app for iOS known as Bamboo Paper. It seems particularly responsive with the Wacom ICS when compared to other apps but Bamboo Paper contains an excessive amount of in-app purchases. Sure Paper by 53 charges for extra tools but the Bamboo App charges you for these as well as virtual notebooks! Absurd.

Paper by 53 doesn’t currently support the Wacom Intuos Creative Stylus but this might change in the future. There is certainly a lot of demand from the Paper community and FiftyThree do already support the (some would say inferior) Ten1 Pogo Connect Stylus. This thread in the FiftyThree support forums details requests for Wacom ICS functionality and I’d urge you to register your interest if you’d like to see it supported in the future.

There are a whole host of other apps which support the advanced features of the Wacom ICS – Autodesk SketchBook, Adobe Ideas for iPad, ArtStudio, Inkist, Flipink, MyScript Notes, Sketch Club and Zen Brush to name but a few.

In its current incarnation the rival Ten1 Pogo Connect stylus is not working with the new iPad Air while support for the new iPad mini with Retina display is apparently shaky also. The Pogo Connect also has a worrying amount of negative reviews on Amazon criticising the build quality, particularly with regard to the pressure response sensor’s soldering breaking away. By the sounds of it, the Ten1 support team are great and send out new styluses if you contact them about a fault but I don’t want to be having to do this every couple of months. One cool feature of the Pogo Connect is that the LED light in the side of the Pogo Connect Stylus lights up with the colour you have selected in certain apps but this is a bit of a gimmick as the colour you’re using will likely be displayed on screen as well (and probably more accurately).

As mentioned the Pencil by 53 is another Bluetooth connected stylus but it lacks pressure sensitivity making it incomparable in my opinion to the Wacom Intuos or the Pogo Connect (which is supported by Paper). This lack of pressure sensitivity in Pencil is particularly problematic as the Paper app for which it is designed doesn’t even allow you to change brush sizes.

There are also the JaJa Pressure Sensitive Stylus by Hex3 and the Adonit Jot Touch Stylus to consider. These are supposedly more accurate as they feature finer points which are surrounded by clear plastic disks so you can see what you’re drawing. However a lot of reviews point out that it doesn’t actually end up being any more accurate as the iPad detects the whole disk rather than just the center, and perhaps more worryingly that the relatively hard nib scratches iPad screens.

Essentially there are not yet any perfect pressure sensitive styluses on the market for iPad but the Wacom Intuos Creative Stylus comes pretty close and is definitely your best bet for now. Please leave your own reviews for this stylus in the comments below if you have tried it.