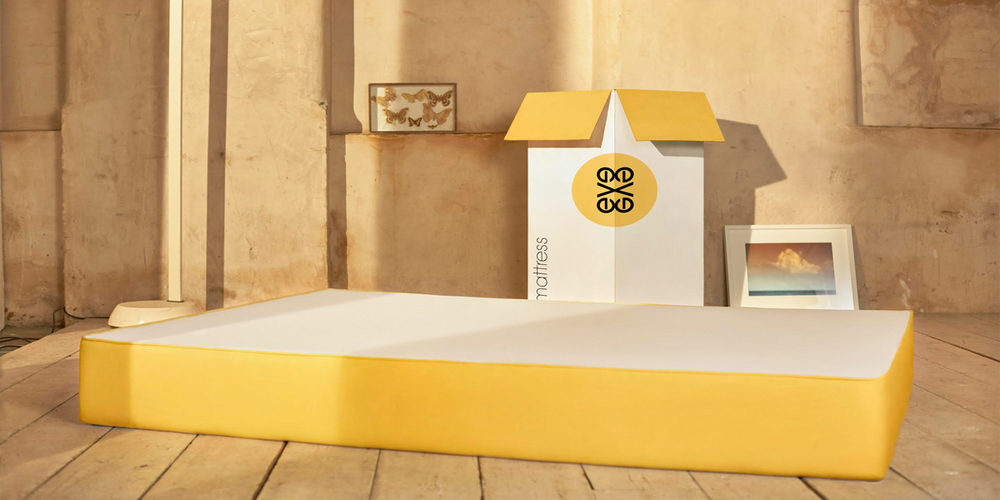 Eve set out to design the perfect mattress, and to show how seriously they take this goal, their product range consists of just one model. This is a refreshing alternative to the status quo, in which manufacturers seem to bombard customers with countless variations (that all seem to be suspiciously similar except in price). The Eve mattress has a structure composed of several distinct layers of foam, which gradually get firmer towards the base of the mattress. This starts with an ultra-soft latex foam surface padding, onto memory foam and finally reflex foam as a base. What’s interesting is that because there are no metal coils in Eve mattresses, they can be delivered and moved up staircases while rolled up in a box. Eve feature a lot of images on their website of these boxed mattress on bicycles, (although I shouldn’t imagine this delivery method is offered nationwide). Eve also seem to be the first mattress makers to actually care about the aesthetics of their beds, with a decidedly modern white and yellow trim and some rather cool typographic prints. These typographical designs are described as special editions, with a choice between the poetry of Wordsworth, Alice’s Adventures in Wonderland, Treasure Island, Huckleberry Finn, or an array of selected quotes on the subject of mornings. The typography special editions don’t actually cost any extra than one of the standard Eve mattresses in the equivalent size, and the price of an Eve Mattress ranges from £350 for the cheapest UK single, up to £700 for a Super King size. Interestingly, Eve also cater to ‘Ikea’ sizes, which vary by around 10cm and have become something of a standard in the UK, with compatibility issues with fitted sheets and the like. The Eve mattress design seems to have received generally positive reviews on their website, but it would be really appreciated if you could share your experience in the comments below.