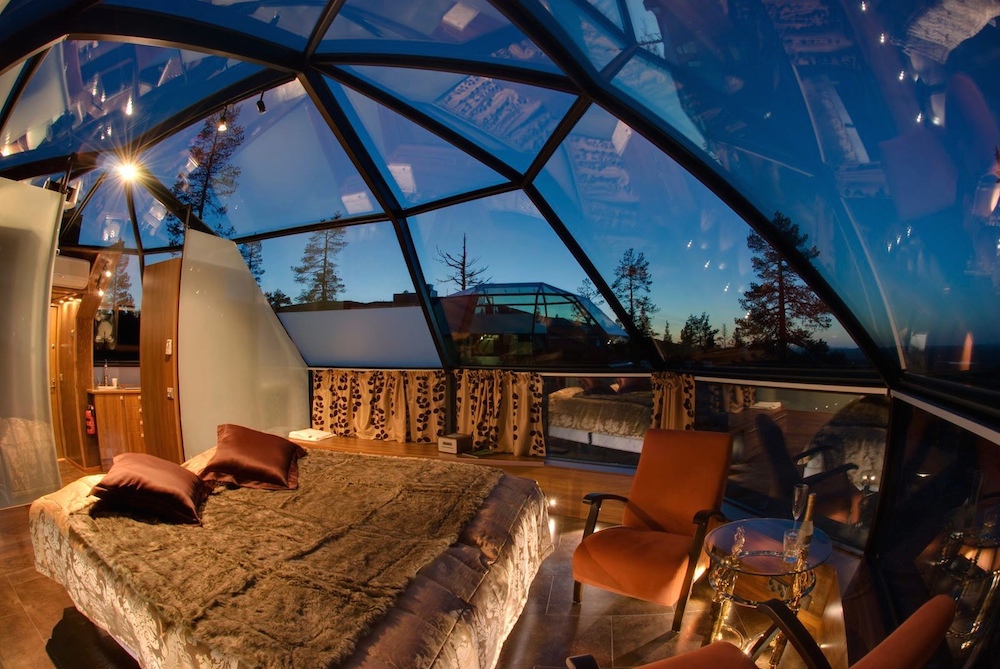 What better way to view the northern lights than from your bed through a glass roof? Well that’s what the accommodation of Finnish hotel Kakslauttanen offers guests with a village of geodesic dome glass igloos. The unique setting merges old and new with a traditional igloo-shape being composed of an angular glass framework. The igloos are created from a highly effective thermal glass which keeps the insides nice and cosy while temperatures outside plummet to -30˚. This special glass manages to stop condensation from forming on the inside while also preventing frost from settling on the outside of the igloo to offer guests a clear view of the northern lights. There are currently 20 glass igloos at Kakslauttanen but due to their popularity and the viral sensation that pictures of them have caused, they’re continually expanding their village to cater to demand. The glass igloos were originally designed to accommodate two guests each but Kakslauttanen will also be offering four-person igloos for the 2014-15 winter season. The glass igloos at the Kakslauttanen Arctic Resort are most sought after during the Aurora Borealis season – between August and April – when guests have the best chance of witnessing this extraordinary natural phenomenon (although this still isn’t guaranteed). However with the Arctic Circle’s long nights of winter comes the midnight sun of summer, and it’s not clearly explained how one goes about sleeping in a glass structure without curtains during the remainder of the year.

Hotel Kakslauttanen does also offer guests accommodation in the form of real snow igloos (-3˚ inside) as well as warm, cosy traditional log cabins which might pique your interest.