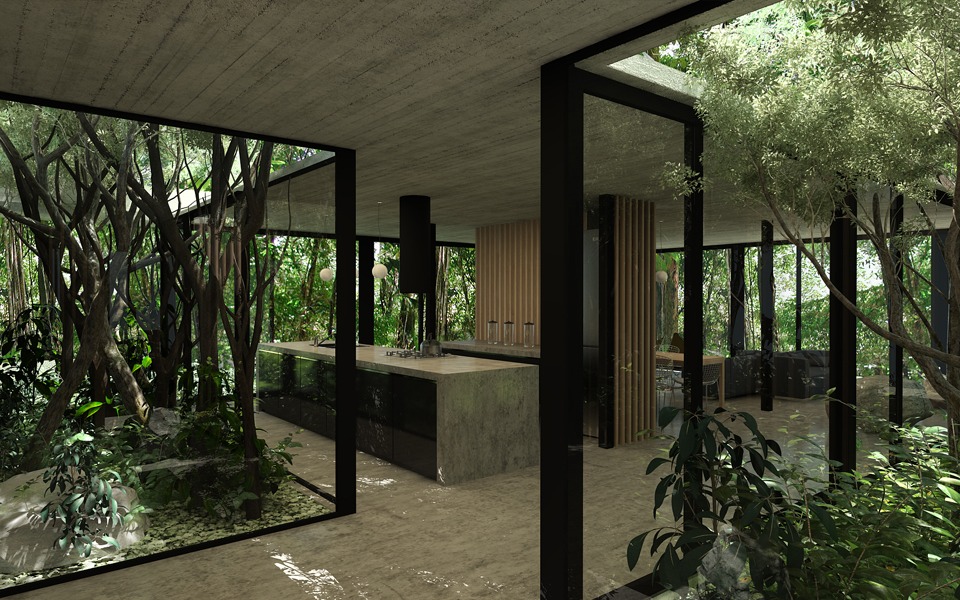 Set within dense Brazilian rainforest, Gres House serves to blur the distinctions between outside and in, while keeping trees, bugs and other nasties affirmably on the other side of the glass. The dwelling makes extensive use of floor-to-ceiling windows, which comprise virtually all of the external walls, and an overtly angular floor plan to maximise the views out onto the surrounding forest. Gres House was designed by Luciano Kruk, who once comprised BAK Arquitectos along with Besonías Almeida. In the past we featured Pedroso House by BAK Architects and a lot of the idiosyncrasies of the former architectural office are evident in Luciano Kruk’s recent projects. The unusually shaped rooms might seem to bottle-neck the flow of space, but these narrowings actually serve to create an illusion of the outside and inside becoming one. For example if you were to cast a glance from the corridor to the kitchen, you would see a cluster of trees in between while the interior space remains sealed. But Luciano Kruk has continued this outside-inside motif – and taken it a step further – by even including boulders within corridors and rooms. While certainly being an unusual form of ornamentation, these large rocks help break up the space and also by the looks of it serve as pretty neat stools.

The use of extended wings and courtyards in the floor plan also helps to keep work and living spaces separate. There’s a clear distinction between this desk area and the living space opposite, which to get to you’ll have to either take a step outside or go the long way round.